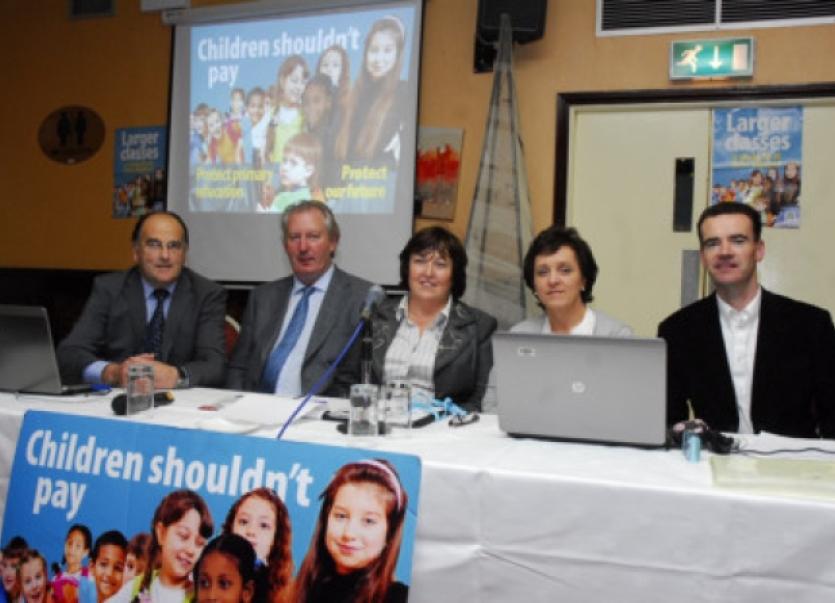 The message from the public INTO meeting in Carrick-on-Shannon on Monday night was that we must “force the Government to listen.”

The message from the public INTO meeting in Carrick-on-Shannon on Monday night was that we must “force the Government to listen.”

Approx 150 people attended the meeting which discussed the threat of increasing teacher pupil ratios in the budget which could make big classes even bigger and push smaller schools to lose teachers.

Michael Weed from INTO Donegal & Leitrim gave a presentation on figures, and said he understood Minister Quinn may increase the pupil teacher ratio by two pupils. He said Ireland has the second most crowded classes in the EU.

He said many schools have lost teachers, funding, resource hours, special needs assistants and are struggling.

Mr Weed noted that teachers at the moment are finding it difficult to deliver the full curriculum to large classes. 726 children in Leitrim are in “super” classes over 30,

Malachy Molloy, Chairperson of Scoil Mhuire NS in Carrick stressed that the meeting was not about teachers’ pay or jobs, it was about the best education for pupils. He suggested cutting the building funding and looking at the cost of the redress board to find money in the Department of Education.

Teresa Moran, Principal of Cloone NS said that they will need to have 60 kids to keep three teachers next year.

She said in 2008 Ruairi Quinn made a plea against increasing the teacher pupil ratio and now he has changed his mind.

Brenda Reynolds, teacher of a class over 30 infants in Carrick said, “We barely have enough space to get around to deal with all the kids.” She said they have been told to concentrate on literacy and numeracy and forget about other subjects. She said it is a worry that all children are not receiving the best attention.

Parent Helen Kennedy said quiet, talented and slower children lose out in big classes. She said large classes is no more than a “baby sitting service.” She said “we sell ourselves as a smart economy and yet we cut back on education.”

Jerome Quinn, Principal of Aughnasheelin NS said “small schools are suffering” and he asked people not to allow this “abuse” of their children.

Joe Killeen INTO said we must “force he government to listen.”

Deputies Michael Colreavy and Denis Naughten spoke and pledged their support along with local councillors.

Parents are asked to continue to lobby their TDs prior to the budget.