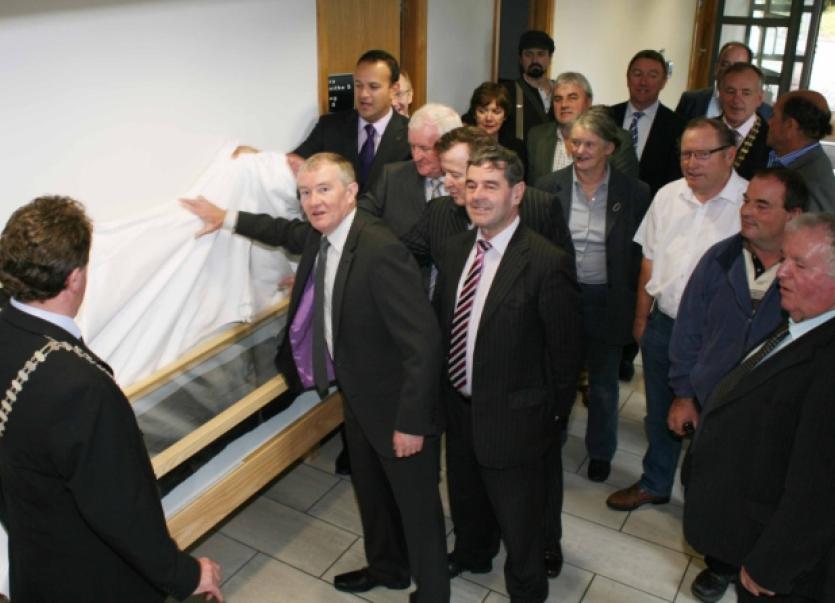 Acting County Manager Martin Dolan said it was a special day for Leitrim and Carrick when Minister Varadkar unveiled a beam from “possibly the first bridge” in the county town.

Acting County Manager Martin Dolan said it was a special day for Leitrim and Carrick when Minister Varadkar unveiled a beam from “possibly the first bridge” in the county town.

The historic oak beam which was found in 2008 beneath the parking area immediately upriver of the Carrick-on-Shannon bridge on the Leitrim side of the River Shannon has been encased in glass at the main area of Aras and Chontae, Carrick-on-Shannon.

Archeologist Martin Timoney said the National Museum of Ireland is happy to have the historic beam kept here in the county.

The oak beam was dendrochronologically dated at Queens University Belfast by Dave Brown.

The calculated estimated felling date range is taken to be after AD1619, based on adding that the likely felling date, considering that the beam has been cut back, would have been in the second half of the 17th century, most likely after AD 1660.

Mr Timoney said we know of three successive bridges across the Shannon at this Carrick-on-Shannon location.

The present bridge of 1845-1846 succeeded an eleven arched stone bridge built in 1718 under the direction of Mr Glover, a Scottish engineer whose descendants still live locally.

The 1718 stone bridge replaced a wooden structure that was built by AD 1683.

The substantial beam may be from the wooden bridge built in AD 1683 or it may perhaps be a constructional beam from the AD 1718 bridge.

Cathaoirleach Sean McDermott said it was important to note that this beam comes from around the time Carrick-on-Shannon received its charter as a town (1613). He said it is an important part of the county’s history.

The council presented Minister Leo Varadkar with Leitrim Crystal and a new book from Dr. Gerard MacAtasney, entitled “The Plantation of County Leitrim 1585-1670” which includes ground breaking and unpublished material. Some items for this book were discovered during Dr MacAtasney’s research into 1916 hero Sean MacDiarmada.

Minister Varadkar said he was delighted to unveil this historic beam as he admitted to being a “history buff”.

He suggested that maybe Leitrim should share the beam with Roscommon as it once connected the two counties, but this suggestion was met with laughs from those present!

During his speech Minister Varadkar spoke about a few items including the fact that his department is scheduled for a €155million cut in the roads allocation.

But he said he hopes it can be mitigated and that Leitrim will not be effected by it.