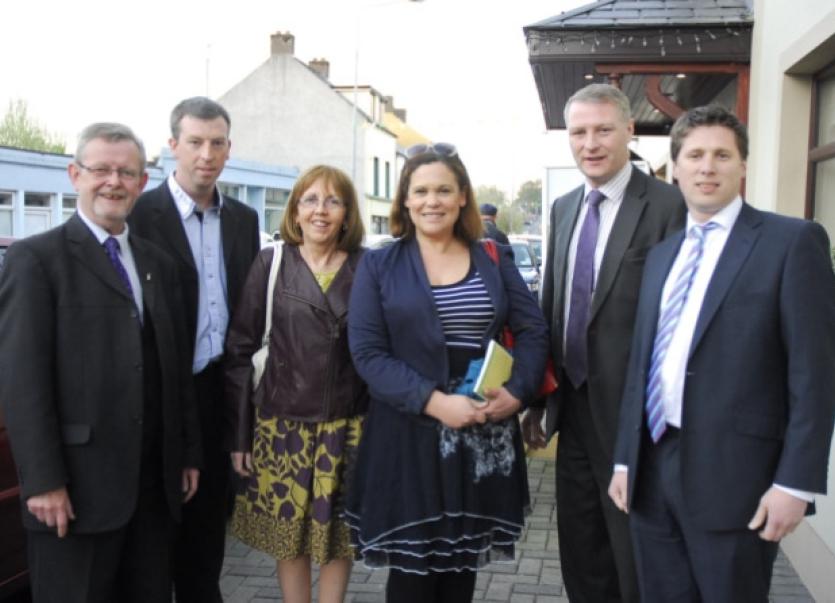 Described as the “box office” of Sinn Féin for the crowd she draws, Mary Lou McDonald TD made a big impression on the large crowd in Ballinamore last Thursday, April 24, one month before the local and European elections.

Described as the “box office” of Sinn Féin for the crowd she draws, Mary Lou McDonald TD made a big impression on the large crowd in Ballinamore last Thursday, April 24, one month before the local and European elections.

Mary Lou met with local interest groups around Ballinamore to hear concerns and issues including procurement, tourism, farming, fracking, emigration and water rates before she addressed over 200 people at a public meeting in the Standing Stone Hotel.

The focus of the meeting was about “holding the Government to account” and she informed the crowd that the best way to do this is have a rebellion at the ballot box. She said she believes Sinn Féin are the best party to lead this rebellion.

Despite being one of Ireland’s oldest political parties, she said Sinn Féin is treated like the new kids on the block, she said they have a different way of working “we tell it how it is,” “we challenge and hold the government to account on behalf of you.” But she said they need more councillors, more MEPs and more TDs from Sinn Féin.

Mary Lou spoke about her work in the Public Accounts Committee and the party’s stance on the Garda whistle blowers and the charity scandals. She said all tax payers money must be accounted for.

In relation to property tax, water charges and the cuts in medical cards, Mary Lou told the crowd that the Government stance of “there are no choices” is a lie. She said Sinn Féin’s alternative plans have been called “fairy tale” but she said that the Government’s cuts are a “nightmare.”

Matt Carthy also put forward his stance that counties like Leitrim need vision and strategic planning to bring back our young people which he called an “endangered species” in small towns.

He said European regulations are being “forced upon us” and he wants to help put forward an “alternative view”and expose and challenge the current austerity.

Questions from the audience on the night included water charges “for undrinkable water”, the issue of trade between north and south for farmers and job creation.