Boxer Bernard Dunne calls for a Gaelcholaiste at Manor meeting 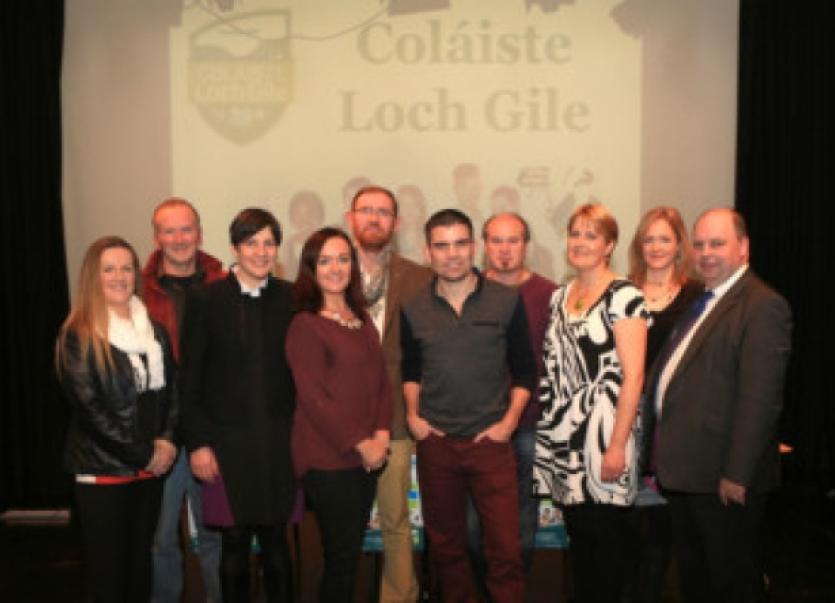 There was a large attendance at the second public meeting in the Glens Centre, Manorhamilton last Thursday to establish Gaelcholáiste Loch Gile.

There was a large attendance at the second public meeting in the Glens Centre, Manorhamilton last Thursday to establish Gaelcholáiste Loch Gile.

Speaker after speaker brought it home that schooling through Irish would have continuous positive effects on those who were lucky enough to have the opportunity.

The main guest speaker and World champion boxer, Bernard Dunne, said “I would be very surprised if parents didn’t jump at this opportunity, sending them to a Gaelcholáiste will make you and your children very proud”. Pádraig Ó Baoill (History and Irish teacher Coláiste an Eachréidh, Loch Rae) said that “A decision to send your child to a Gaelcholáiste is a decision that will have a very positive long term influence on your childs confidence and cultural outlook”.

Bernard addressed the issue of pupils from English schooling backgrounds moving to Gaelic secondary school with “Gaeilge is not just for the privileged, it’s for everybody. If I can learn Irish after as many knocks to the head as I’ve had then surely a child of 13 or 14 can learn it fluently within a couple of months in a Gaelcholáiste”.

Guest speaker Katríona Ní Chiarragáin (teacher in Gaelscoil Chnoc na Rae Sligeach), concurred saying that she was “living proof” of how easy it is for children who attend a Gaelcholáiste coming from an English schooling background.

Brendan Ó Dufaigh (Príomhoide Coláiste Ailigh, Muighneachán) spoke about his committee’s vision for their Gaelcholáiste, saying that “We weren’t just going to offer education in Irish, we made it our mission to supply a even better education than was already on offer in the county. This we did, we had the highest third level transfer in Ulster until last year when another Gaelcholáiste in Leitir Cheanainn took over the top slot and we landed in second place.”

During question time Liatroim County Councillor Feilm Gurn lent his support to this project saying “As a member of Comhairle Chontae Liatroma I fully support this committee in its endeavour to set up a Gaelcholáiste. I do urge them though to consider locating the Gaelcholáiste in North Liatroim.”

When asked about the possible location and subject choice Anna Ní Bhroin (Cathaoirleach Choiste Bunaithe Coláiste Loch Gile) said that “the sub committee were presently looking into three very suitable locations in Sligeach but that no decision would be made until the new year when the numbers of the first children to attend would be counted.”

On subject choice, Anna quoted the CEO of the Education Training Board, the committee’s chosen patron, Seosamh Ó Murchú who spoke at the meeting in the Glass House Hotel saying “ We promise that from day 1 we will have a full curriculum available to the pupils attending Coláiste Loch Gile, the same as we have done for all the Gaelcholáistí we are patrons of”.

Bernard Dunne got the biggest applause of the night when he said “ In LA I noticed I was one of the few people from other nationalities who couldn’t speak his own language, I was awfully embarrassed. So instead of running from this feeling I fought it and decided to learn the language, my language, mo theanga. I made it my mission to pass this language on to my children. Speaking my own language to my children is as important to me as the love I give them.”

Parents who may have been on the cusp of deciding were utterly convinced at the end of the speeches and were looking for the forms to sign their children up to Coláiste Loch Gile.