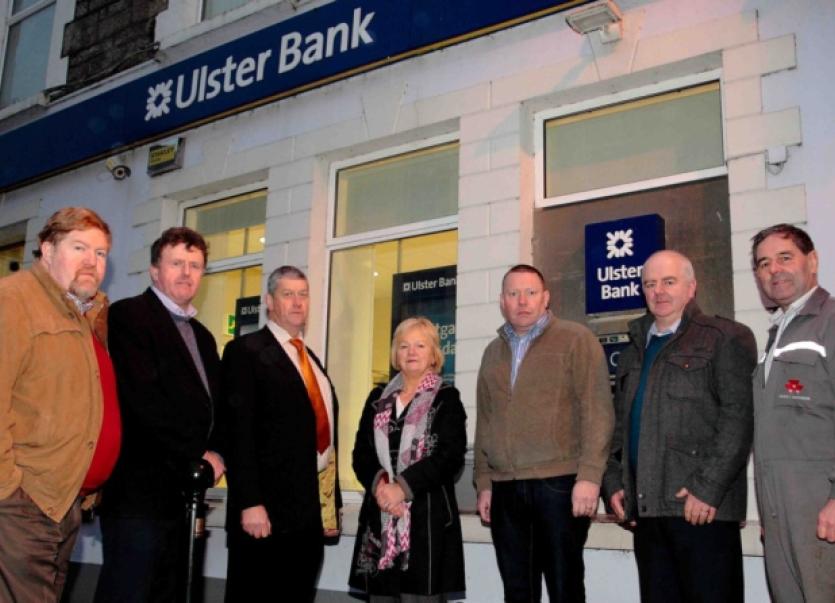 Manorhamilton residents, business owners and public representatives have expressed their anger over plans by Ulster Bank to close their only remaining branch in the county next March.

Manorhamilton residents, business owners and public representatives have expressed their anger over plans by Ulster Bank to close their only remaining branch in the county next March.

Last Friday Ulster Bank issued a statement confirming the closure of 14 more branches in the Republic including its branch in Manorhamilton.

The bank said it expects ‘a number’ of job losses to occur across the country as a result, but added that staff will be invited to apply for redeployment to other branches.

The cuts are part of a branch closure strategy announced in July of last year which has resulted in the closure of 24 branches.

Ulster Bank customers in Manorhamilton will now see their accounts moved to Sligo Town, a change which local councillor, Felim Gurn, has described as unacceptable.

Speaking to the Leitrim Observer, Cllr Gurn described the situation as “totally unacceptable”.

“People supported Ulster Bank after the IT issues two years ago and this is the thanks they get,” he said.

“Banking is a vital part of every community and now when Manorhamilton needs support, Ulster Bank has taken its business elsewhere. People are now facing the prospect of having their accounts moved to Sligo, 16 miles away,” noted Cllr Gurn, adding that this completely disregarded the fact that many people still did not have access to internet banking while others would not have the capacity to travel so far to do their banking.

“What we are seeing is a downgrading of services in Manorhamilton. Here we have Ulster Bank closing a branch, but other banks in the town have also reduced services. Our Bank of Ireland branch is not accepting cash deposits on Wednesday and Thursdays and there is only one bank machine in the town.”

Raising the matter during Monday’s Annual Budget Meeting, Cllr Gurn put forward a proposal asking the Council to contact Ulster Bank and request that the building be given back to the community for use in local projects adding that this was “the least they could do for the customer base it has served for such a long time”.

His words were echoed by the other councillors from the Manorhamilton Municipal District Area along with Senator Michael Comiskey, who met outside the Ulster Bank branch in Manorhamilton earlier this week.

Senator Michael Comiskey said he is very disappointed with the closure noting “The closure of the Manorhamilton branch is a huge loss to the community and will have a negative effect on local business.

“It is an awful pity to see another premises close on the Main Street in Manorhamilton,” he said adding that he would be writing to the Manager of the Ulster Bank in Manorhamilton and also to the Management of the Royal Bank of Scotland to see if this closure can be reversed.

It is understood that Ulster Bank is in discussions with An Post about providing services to its customers through An Post offices.