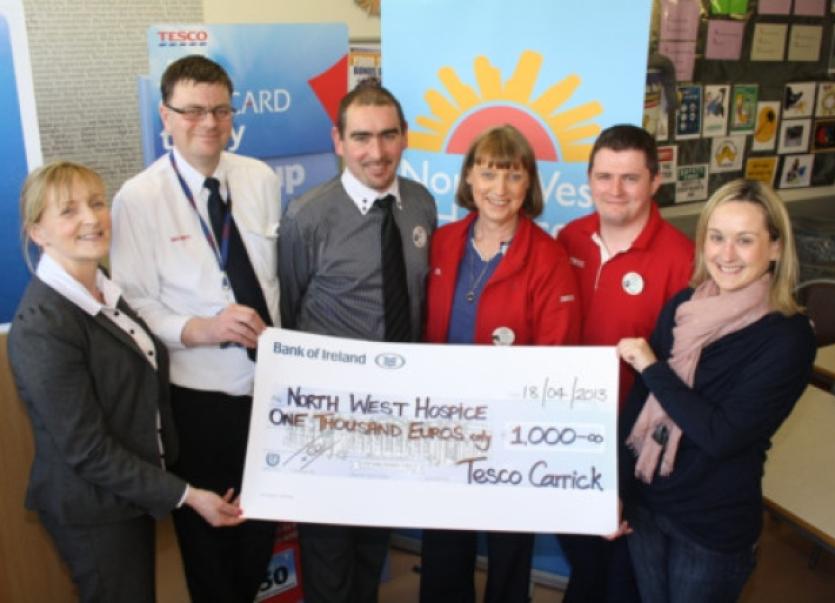 The staff and customers of Tesco in Carrick-on-Shannon recently raised €1,000 for North West Hospice.

The staff and customers of Tesco in Carrick-on-Shannon recently raised €1,000 for North West Hospice.

The much-needed funds were raised through the Easter Raffle organised by staff at the Carrick-on-Shannon store.

Winners of the raffle were Dermot O’Hara from Boyle, Bernie Dockery from Annaduff and Catherine Clancy from Drumkerin.

Accepting the cheque from Tesco staff recently, Lisa Butler, Chairperson of the Carrick-on-Shannon North West Hospice Support Group said “We are very grateful to the staff of Tesco in Carrick-on-Shannon for their support and for taking the initiative in organising this raffle, and also to the people of the community who supported the raffle and gave so generously.

“North West Hospice has to fundraise €1million every year through voluntary contributions, donations and fundraising events to keep its palliative care services in operation. This is a huge task, but through the support of communities such as ours here in Carrick-on-Shannon, it can be achieved”.

North West Hospice is dedicated to helping people who are living with life-limiting illness in Sligo, Leitrim, South Donegal and West Cavan to improve their quality of life through the provision of consultant-led specialist palliative care.