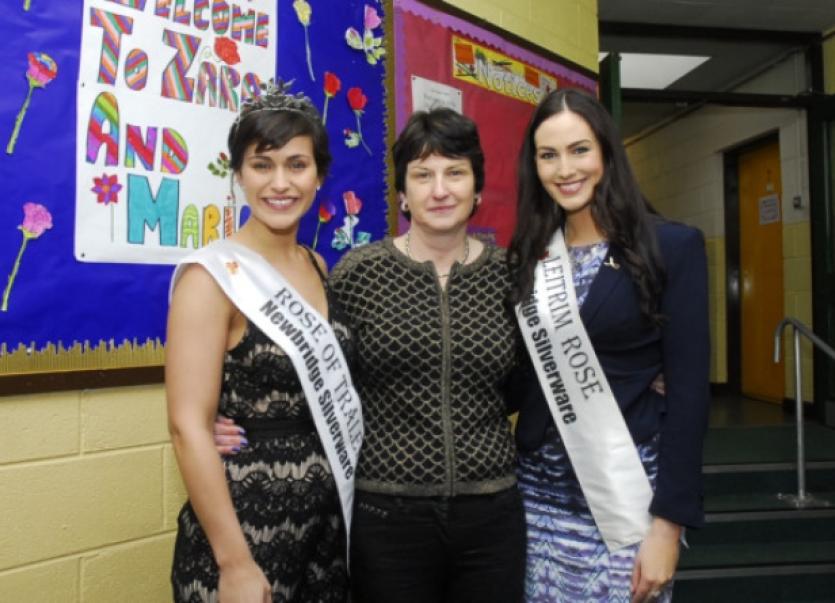 The 2014 Rose of Tralee was accompanied by Leitrim Rose Zara Healy, when she visited the county for the second time on Monday morning as part of the search for the next Leitrim Rose.

The 2014 Rose of Tralee was accompanied by Leitrim Rose Zara Healy, when she visited the county for the second time on Monday morning as part of the search for the next Leitrim Rose.

Maria Walsh, the winner of last year’s contest, visited a number of locations in Carrick-on-Shannon including The Hive, Grafter’s Hair Studio, Jewel and The Bush Hotel.

Originally from Boston, Maria moved with her family to Shrule in Mayo twenty years ago. The 27-year-old, who currently works as a Studio Manager for Anthropologie, a clothing and lifestyle brand based in Philadelphia, has experienced a whirlwind journey since she was crowned Rose of Tralee just five months ago.

Visits to India and South Africa were all part of her packed itinerary, while both Maria and Zara will visit Chernobyl with renowned humanitarian Adi Roche next month.

“It’s been busy and I’ve been racking up the air miles but it has been great. The opportunity to be involved in the Rose of Tralee whether you’re an escort or a Rose is just such a great experience. I wish we could bottle it and sell it. It’s one of those experiences that you have to experience it to appreciate how great it is.”

Describing the welcome she received throughout the county this week, Maria recalled her first visit to the county in August last and said her presence was greeted just as warmly second time round.

“I was here last August with Zara on the Rose Tour. We arrived at Moon River and stayed at Lough Rynn, had lunch in The Bush, visited Flynn’s and the Arigna Mines.

I would have been quoted so many times in the national papers about how lovely I thought Leitrim was, but we got the most genuine welcome, everyone was so excited to see us. And today (Monday) was the same.”

Following their visit to Belarus, both Roses are on the move once more in March when they travel to New York to meet up with eachof last year’s Roses at a gala ball. Zara’s reign as Leitrim Rose then comes to an end in May when her successor will be chosen.