Joe and Rosie Dolan honoured at launch of 2016 Leitrim Guardian 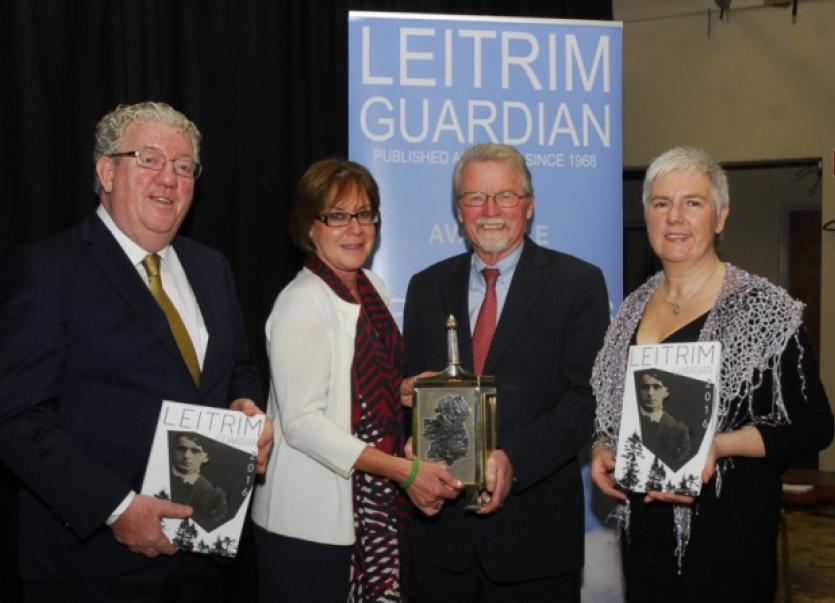 The launch of the 2016 Leitrim Guardian last Friday night in Kiltyclogher, the birthplace of patriot Sean MacDiarmada, was a fitting tribute as the 100th anniversary of the Rising approaches.

The launch of the 2016 Leitrim Guardian last Friday night in Kiltyclogher, the birthplace of patriot Sean MacDiarmada, was a fitting tribute as the 100th anniversary of the Rising approaches.

Editor, Dr. Blaithín Gallagher and her hard-working committee, under the Chairmanship of Hubert McMorrow, have overseen the production of the 48th edition of the famed Leitrim annual magazine.

Packed into the 144 pages are fascinating stories from all over the county and beyond on historical matters, the arts, memoirs, short stories, sports achievements and aspects of the community. Added to that are features from various contributors. It is a slice of Leitrim life contained in a periodical that is unique in Irish publishing.

The awarding of the Leitrim Person of the Year to popular Carrick-on-Shannon couple Joe and Rosie Dolan of The Bush Hotel was another very fitting tribute.

Accepting the award from last year’s recipient, Dr. Frank Brady, Joe Dolan, with his wife Rosie at his side, delivered a most powerful and poignant speech to the assembled gathering.

Joe recounted his and Rosie’s life together as husband and wife, father and mother and business partners ­— all the accomplishments and achievements, the joys, the sadness, the heartbreak and the healing that they have experienced.

It was emotionally charged as Joe spoke of their profound sadness at the loss of their son Andrew almost four years ago and the healing process they have gone through since that time.

The Dolan and Laird families have been immersed in the business and social life of County Leitrim and North Roscommon for generations. Their continued commitment to the community can be seen everywhere and it was a fitting tribute to them to be selected for this year’s prestigious award.

You can read all about their life story in the opening pages of this year’s edition.

Much tribute must be paid to Blaithín Gallagher for the finished product, which she had to complete during a time of deep personal sadness following the death of her brother Dara.

Also to Fiachra Gallagher Dawson for the concept and design of the front and back cover.

A number of photographers have contributed handsomely to the publication and thanks must also go to Tony Fahy for design and production and Turners Printers for their professionalism.

Blaithín Gallagher would like to express gratful thanks to the sponsors of the literary awards.

Gabriel Cronin, Dental Technician, sponsored the Poetry Awards which was won by Esther Hoad for ‘Atonement’, second was Nora McGillan for ‘The Brown Coat’, and third Lionel Mullaly for ‘Emeralds.’

Carrick Cineplex provided all the young writers with cinema tickets as part of their prize.

James Rogers from Mohill won the Leonard Perpetual Trophy and the MJ McManus Literary Award for ‘The Ball.’

Special Merit Award went to Sarah Smith for ‘Education is not the filling of a pail.’

Aisling Doonan from Carrigallen won the Leitrim Guardian Literary Award sponsored by Frances Kelly, Sligo Estates for ‘I am the Secret Keeper.’

• Next week’s paper will carry all the photos taken at the launch.