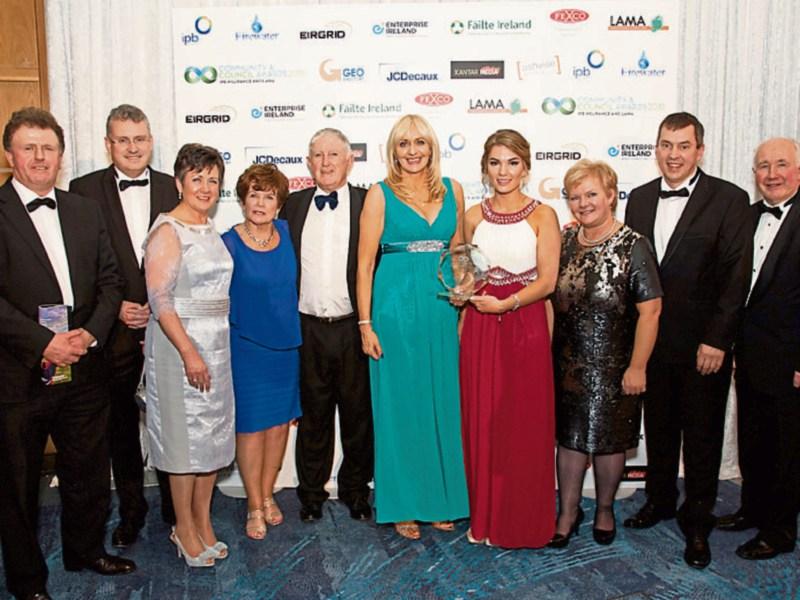 Orla McNabola from Carrick-on-Shannon won a National Recognition Award at the weekend for her CPR practice which saved a man's life last April.

Readers may recall the Leitrim Observer's front page story from May last year about the 76 year old man whose life was saved by the actions of a number of locals.

Johnny Martin suffered ventricular fibrillation on April 24, 2015. He collapsed hitting his head. The incident resulted in his hear stopping.

The 17-year-old Carrick-on-Shannon Community School student was one of the people instrumental in saving Mr Martin's life.

She told the Observer after the event “I was in Subway and one of my friend's little sisters had been in Francesco's and saw Johnny collapse. I went down to Francesco's thinking 'I wonder will they need help with CPR?'

“So I went down on the off-chance and saw Johnny through the glass. I ran in and told the two ladies who were working in the shop that I could help.”

Orla who is a part time Lifeguard at Aura Leisure Centre and trained in CPR and was familiar with the workings of a defibrillator. She worked on Mr Martin until a defibrillator was delivered by Rosie Dolan and Brenda Dunne who were also trained to use the defibrillator.

Orla's CPR procedure was essential along with the defibrillator in keeping Mr Martin's heart working until the ambulance arrived on the scene.

Councillor Finola Armstrong-McGuire who was very “impressed” by Orla's actions.

"She is a young girl and for her to kneel down beside someone she did not know and administer CPR in front of older people, her friends and strangers took a lot of courage and strength" she told the paper.

At the awards ceremony Noel Brady from Dublin who had worked with St Johns Ambulance for 75 years won the Emergency Response award.

The judges were so impressed with the heroic actions of the local student they awarded her a Special Merit Award.

Orla has started her Mock Leaving Cert exams in Carrick on Shannon Community School this week.

Her parents Antonia and Micheál, brothers and the community of Carrick-on-Shannon are very proud of Orla's life-saving actions.