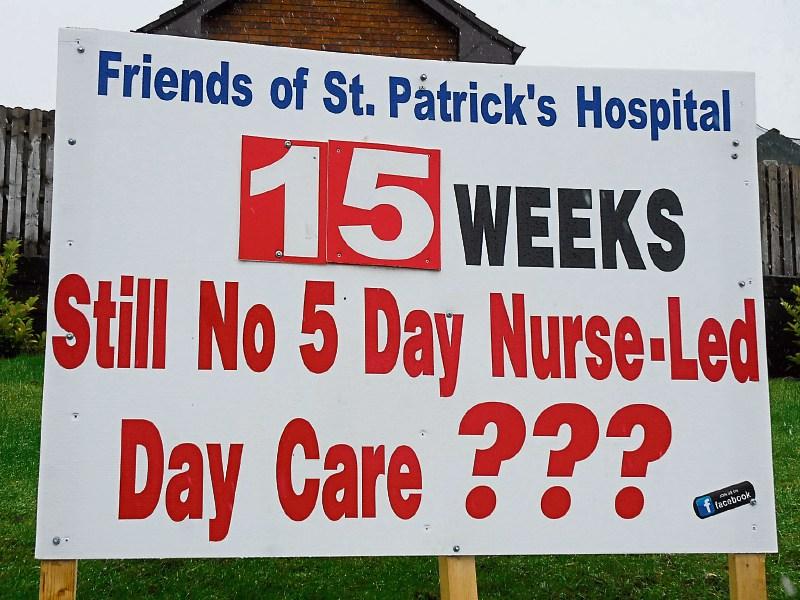 In the lead up to the General Election Friends of St Patrick's are seeking party commitments from local candidates to the restoration of five day nurse led care at St Patrick's Hospital Day Care.

On December 22, 2015 the group wrote to the local representatives of all political parties inviting them to commit to the building of a new hospital in Carrick-on-Shannon and to the reinstatement of 5-day nurse led care at the day hospital.

“While the announcement of €15.75m for a new hospital is very welcome news we are disappointed in the HSE’s failure to re-instate 5-day nurse led care,” the group stated.

The group wrote to the election candidates saying, “We respectfully request you to use your offices to obtain high level commitment from your political party in regard to St. Patrick’s Hospital.

“In particular we request that you seek a letter from your party leader or possibly health spokesperson which, as a minimum, commits specifically to the following:

“With regard to nursing care services at the Day Hospital: Commitment now to the immediate re-instatement of the 5-day nursing led care services should your party form part of the next government, to mean within two months of the commencement of the new Government in office.”

“The Friends of St. Patrick's are delighted that local Green Party candidate Leslie O'Hora took up the baton and has received a positive response from Party Leader Eamon Ryan.

“Deputy Eamon Ryan has responded with not only its affirmation of commitment to a new hospital but also with its assertion that “a 5 day nursing led services is absolutely essential.”

Liam Scollan on behalf of the Friends of St Patrick's Group said they will continue to share the detail of responses to the public in the run up to the election.

A public meeting by the Friends of St Patrick's Hospital will be held in the Bush Hotel, Carrick-on-Shannon on Thursday, February 18 at 8pm. The objectives of the meeting are to inform the public on the up to date position in relation to the reinstatement of the 5-day nurse led day care service and to afford the political candidates in the upcoming General Election the opportunity to confirm their Party's official commitment to the reinstatement of the nurse led services at the Day Hospital.

The group told the Leitrim Observer, “Currently the HSE's position is that it will not reinstate full-time nursing care in the Day Hospital and will only consider the provision of tissue/incontinence and falls clinics. Our position is that such clinics are welcome but only as an adjunct to a full-time, generic nurse presence covering all of a full 5-day re-opening of the Day Hospital.”