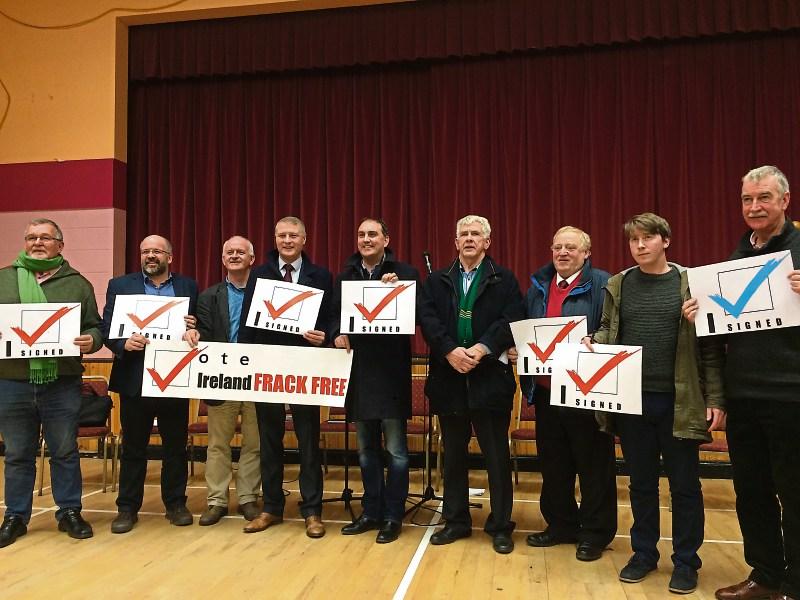 There were daggers, promises and disruptions at the Love Leitrim hustings chaired by Johnny Gogan in the Bee Park Centre, Manorhamilton last Saturday night, February 13.

Thirteen candidates turned up and the crowd saw allegations and counter-allegations in what at times was like a competition on who was the best anti-fracking candidate in the room.

But the meeting had to be cut short due to a small number of protestors at the event. Protestors refused to allow the discussion to continue at the hustings, which resulted in Chairman, Johnny Gogan, closing the meeting prematurely.

Dr Aedin McLoughlin, Good Energy Alliance Ireland (GEAI) told the Leitrim Observer, “I am very upset that a small number of protesters seem to consider public meetings to be an opportunity for anarchic disturbances for their own sake.”

Dr McLoughlin said the greatest threat to Ireland from fracking at present is the proposal to commence drilling in North Belfast. This week, was not even mentioned or discussed.

She said before the subject was introduced, the event was “disrupted” and the event ended in “disarray” due to protestors.

Deputy John Perry (FG) reinforced his “total opposition” to fracking on the night.

Cllr Declan Bree (Ind) warned the audience of believing promises and reminded those in attendance of the broken promises that some candidates had made in relation to cancer services.

He noted his recent motion to have a ban included in the Sligo County Development Plan that was voted down by sitting FF and FG councillors.

Independent Cllr Marie Casserly took the opportunity to inform the crowd of the latest European Parliament vote to ask member states not to authorise any new fracking.

In relation to the EPA study into fracking, Deputy Tony McLoughlin (FG) claimed that Minister Joe McHugh expressed that they would not be going ahead with Phase 2.

Cllr Martin Kenny (SF) alleged that Fine Gael were carrying out political stunts stating the coincidence that on the “day the election was called that the study was stopped” adding he would not trust that.

Senator Susan O'Keeffe (Lab) said that if it came in “it can proceed without me.”

Before the meeting was adjourned a discussion on TTIP (Transatlantic Trade and Investment Partnership) was covered where Senator Marc MacSharry (FF) said he had “large concerns concerning it and how it would threaten farming.”

Nigel Gallagher (AAA-PBP) who supported the 'Stop the Study' campaign in the Dail strongly voiced his opposition to TTIP.

Eamon Murray (Ind) who has attended meetings of Love Leitrim to contribute his time to the anti-fracking movement said he too opposed TTIP.

Last week Infrastrata, an oil/gas company issued leaflets to all houses in North Belfast that they intend to come on site in Woodburn Forest this week and start drilling an exploratory well over a mile deep.

The site is 400 yards from a water reservoir serving 2,000 houses in Carrickfergus without a Waste Treatment Plan in place.