New chapter in national politics as MacSharry tops the poll 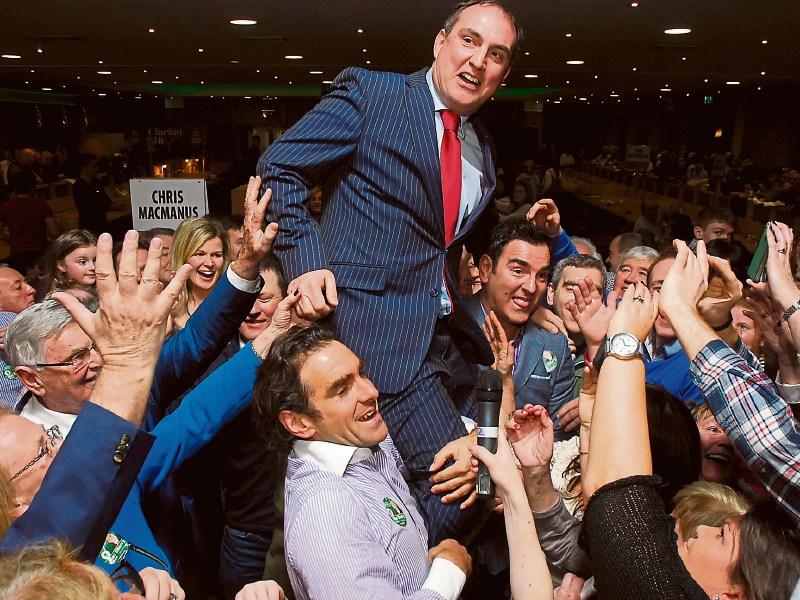 The MacSharry dynasty began a new chapter in national politics when Senator Marc MacSharry topped the poll and in the process swapped his seat in the Seanad for one in the Dail.

From the early tallies it was apparent the Sligo Town man would take the first seat and so it transpired.

A strong campaign by his team right across the constituency saw him receive 8,856 first preferences and this gave him a lead that he never relinquished.

The Fianna Fail party has seen a resurgence in popularity nationally and it was mirrored in this constituency with two seats secured, as well as a strong showing by first time Leitrim candidate, Cllr Paddy O'Rourke.

For the now former Senator it was a day he craved, having been unsuccessful on previous occasions.

A delighted MacSharry told the Leitrim Observer he was moved and humbled by the first preference votes he got but was not surprised by the effort of Paddy O'Rourke.

“I was not surprised at all considering the short period of time he had. We were on the road for six months maybe, Eamon Scanlon as well. From a party perspective Paddy O'Rourke was a late arrival, he didn't get much of a chance to get off the ground, taking that into account he did a fantastic campaign,” he said.

He was forthright in his assertion that the new TDs for the constituency must work closely together to maximise the benefits for this area.

“The most important thing for the constituency is that the four who are elected, to the greatest extent possible, act as one in trying to secure resources for our part of the country.

“Instead of being seen as a national pain in the side, if we were just given some resources to perform to our potential we could not only operate under our own steam but also make a real contribution to the national effort,” he added.

MacSharry spoke at length and with great enthusiasm about the “common cause” of the elected members.

“It has to be like that, the four TDs cannot be star struck by party leaders, ministers, taoisigh or anybody like that. Sure, governments have party discipline but the four who are there must be united in preaching the gospel.”

“Really, we've been left behind here,” he added, and said the message must go out to the government to “stop looking at this region as a pain in the ass” and provide it with “strategic resources so it can perform for itself and for Ireland.”

“It's not being overly critical of this government, I mean successive governments (are at fault). They're missing the bigger picture here.”

One example he gave from an agricultural perspective showed just how big a role this region plays, but also the struggles being experienced by the small and medium enterprise sector.

“Here's a region that, from an agriculture perspective, where 40% of the country's weanlings are produced. We need to resource and support that food production.

“But, we also have 250 empty retail units and 50 empty factories. Give us two big jobs announcements and that will breed an SME sector,” he said.

Nationally, the party have done very well but he sounded a note of caution about the party listening to what is being said on the ground.

“If you look at the mistakes our party made over the years where you had consecutive Fianna Fail administrations for many, many years, an awful lot of good work was done, however, when you're there so long inevitably one becomes out of touch with things on the ground,” he said.

“Lets put Fianna Fail back to what it was good at. All politics must be representative of the people, it's the people's country and whoever ends up in government with all these negotiations that will go on next week, the key is it's the people's message that must be transformed to the national policy platform.

“Look around the region, we have so much potential and that has to excite any of us, politics aside,” Deputy MacSharry concluded.