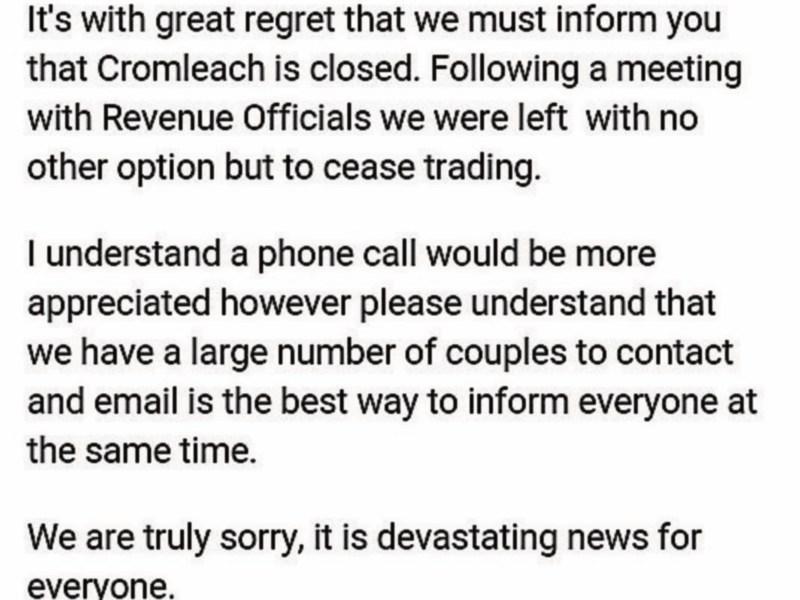 Over 100 couples and 50 staff have been left high and dry after the shock closure of the 4 star Co Sligo wedding venue, Cromleach Lodge Country House, late last week.

The first that many couples heard about the closure was via an email sent to them on Thursday, March 10 informing them that the decision had been made to close following a meeting with Revenue officials.

One bride-to-be, Paula Kellegher, said that she had missed the email because she had been at work in Ballinamore.

“The first I heard that anything was wrong was when someone told me it was on Joe Duffy at 3pm on Thursday,” she told our reporter.

“It was a total shock. I couldn't believe it. Our wedding was planned for October and we had paid more than the usual deposit. When I saw the email and read it I was just numb. There was no mention of what we should do or what would happen to the money we paid over in good faith.”

Paula and her fiancee, Danny Sneyd, had been working and saving towards creating their own special day. “With one email that was all gone,” Paula sadly admitted.

“When I rang (Cromleach Lodge) and asked about the deposit I was told “there's no money, the money is gone”.”

For Paula and Danny the money lost has left them with additional costs they never budgeted for and, with a small child to care for, this is money they could have used elsewhere.

“We worked hard for that money. If it was a case that we had wasted this money on something ourselves by choice, you would say, ok, that's gone, but it is so hard to accept that you worked so hard for something and now it is just gone, through no fault of our own, and we have nothing to show for it.”

Thankfully through coverage in the national media, Paula and Danny were able to get help to save their wedding.

“A woman in the Landmark Hotel, Carrick-on-Shannon, saw our story and noted the date of the wedding. She checked her books and saw that she didn't have a wedding booked for that date and she got in contact with us. Two other hotels got in contact as well so we had a choice and we picked the Landmark and we were able to keep the same date, but the fact is that the money we paid over to Cromleach is gone. How could a business take our money if they were in trouble? Take it and not say anything to us. That is the frustrating part.”

Other couples have not been lucky enough to get a replacement venue.

Ballinamuck native, Amy Leslie and her fiancee, Sean O’Reilly had their wedding booked for September 8 this year at Cromleach Lodge but they are still trying to source a new venue.

“We went up to see (Cromleach) and I fell in love with the hotel and the location, it was just perfect,” Amy explained.

“We picked the date and we paid a deposit. As far as we were concerned everything was fine. The first we heard was an email sent last Thursday, I rang the Wedding Co-ordinator and business owner, Deirdre Ryan, to ask what was happening and she explained the decision had been made to close the hotel and that no deposits were going to be refunded.

“When asked why we had not been contacted personally by phone I was told there were 100 couples affected and it was felt it was easier to contact us by email.”

Amy who is expecting her first child in just three months time said she was shocked and annoyed by the attitude of the hotel owner.

“These deposits were paid in good faith and at no time was there any indication that the hotel would close. I am a small business owner. If I knew my company was in trouble, I would not be taking hard earned money from innocent couples planning their dream day.

“I am so angry and upset and the additional pressure this is putting on us is just so unfair. We had only planned a small wedding and it is so hard to find another venue at such short notice.

“I know other couples who are also having the same problem. I don't feel the management was sincere in their apology and we have been left in limbo along with 99 other couples. We are trying to find out where we stand with our deposits, but the reality is this should not have reached this stage.”