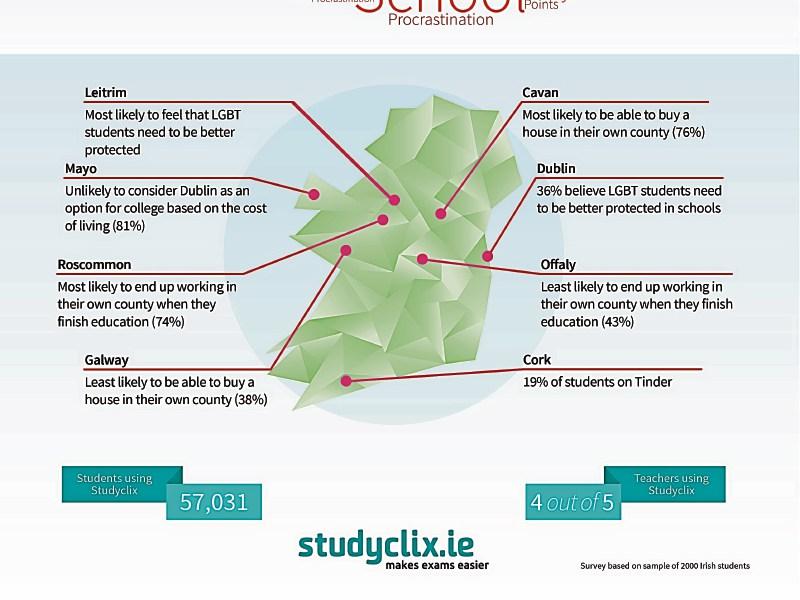 A survey of second level students has shown that nearly three quarters of Leitrim respondents believe they won't be able to buy a home in this county after they begin working and a large proportion believe there is a possibility they will have to emigrate at some point.

The study of 2,000 students nationwide has shown that 73 percent of Leitrim respondents say it is unlikely or highly unlikely that they will be able to purchase a house in their home county when they start working, with a significant number expecting to have to travel outside of Co Leitrim to find a job.

An even more worrying point is that, despite evidence that the economy is starting to recover in recent years, nearly 9 out of 10 respondents nationally felt they would still have to emigrate at some point in their lives.

One of the most startling results was the fact that nearly 67 percent of respondents from Co Leitrim felt that Lesbian, Gay, Bisexual and Transgender (LBTG) pupils needed to be better protected in schools , nearly double the national average.

Speaking about the results in Co Leitrim, Studyclix Co-Founder Luke Saunders said: “I was certainly surprised to see that such a strong cohort of Leitrim students felt that the LGBT students needed better protection. It's obvious that students feel schools are not yet doing enough.”

He said that it was also clear from the responses that one of the lasting impacts of the recession and the current property crisis was the fact that students are much more aware of the housing and financial difficulties facing them when they go on to third level education.

Social media also continues to play an important role in the lives of our young people with 76 percent stating they have used a smart phone to study. 56 percent of students admit their school work has been affected by social media use.

“As a teacher myself I would regularly advise my students to try and confine their social media use to study breaks only,” said Mr Saunders.