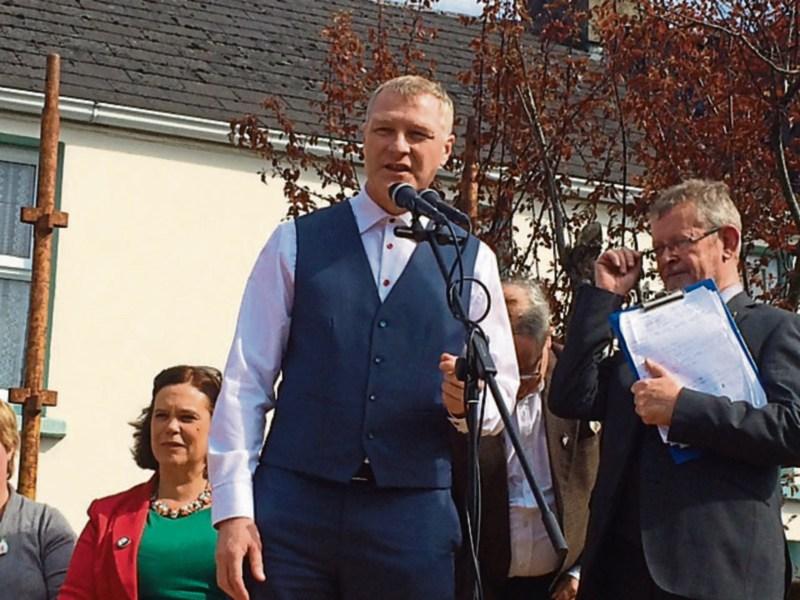 Sligo/Leitrim Sinn Féin TD Martin Kenny and the party's Deputy Leader Mary Lou McDonald were among those who addressed the 100th anniversary commemoration for 1916 Leader and Proclamation signatory Sean Mac Diarmada in Kiltyclogher on Sunday last.

Addressing the large crowd, which included visitors from all parts of Ireland and further afield including the County Leitrim Society, New York and the Leitrim Society, Boston, Deputy Kenny said Sinn Féin was very clear that the Rising was right and just, that it had asserted Ireland's right to freedom, and had set an example for colonised people all over the world.

He insisted Sinn Fein was out to complete the task for which Sean Mac Diarmada had sacrificed his life - a 32-County republic based on the principles of justice and equality for all.

Deputy Kenny thanked the people of Leitrim, Sligo, West Cavan and South Donegal for electing him to the Dáil and said that as the only Sinn Fein TD from Connacht he would work hard to represent the interests of everyone in the West, citing the need for greater investment, infrastructure, service provision and jobs in the region.

The large crowd was also addressed by Sinn Féin Deputy Leader Mary Lou McDonald who stated that Fine Gael and Fianna Fáil need to recognise that Ireland does not stop at the border.

“Partition has created false divisions. The artificial border, just over 100 metres from where we are standing, for decades cut the village of Kiltyclogher off from its natural hinterland.

“This border has separated families, farmlands and communities.

“How would Seán Mac Diarmada feel about the country he died for, still being partitioned 100 years after the Easter Rising?

“And so, in much of the state commemorations of 1916, it seemed that for many in ‘official Ireland’, our country ends 150 yards from the statue of Seán Mac Diarmada here in Kiltyclogher.”

The Sinn Féin Deputy Leader told the huge crowd in Leitrim border town that the men and women of 1916 would have readily understood the republican struggle in the North of recent decades, and would have identified with the brave men who sacrificed their all on the 1981 Hunger Strike, the 35th anniversary of which coincides with the 1916 Centenary.

Pointing to the harsh conditions in Leitrim during Seán Mac Diarmada’s youth, she said that Leitrim and other counties had continued to suffer from emigration and neglect.

“Leitrim, like much of rural Ireland has been hard hit in recent years by a decline in public and commercial services. Rural communities have lost local hospitals, Garda stations, post offices and vital transport links.”

She added, “Sinn Féin is absolutely serious about tearing down Ireland as it has been and replacing it with a real Republic of fairness, decency and equality”.