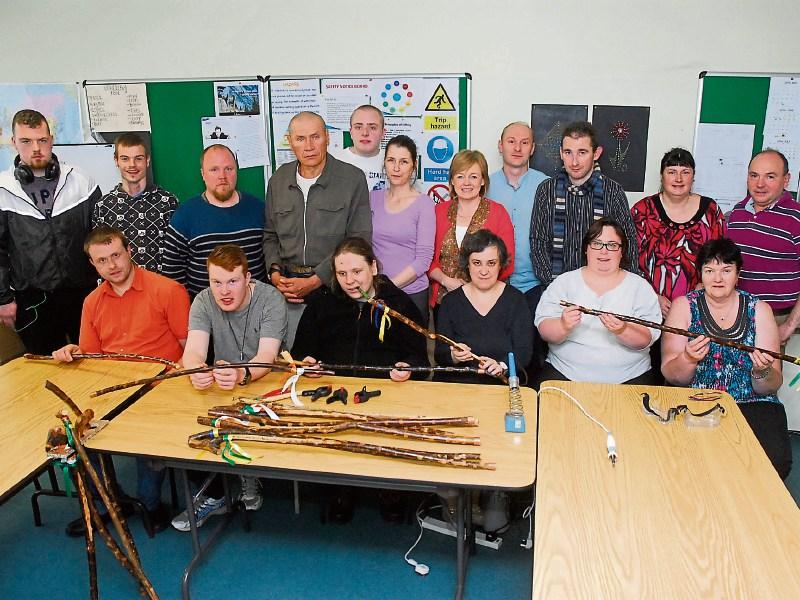 Over the past number of months there have been all sorts of events and commemorations to mark the 100th anniversary of the 1916 Rising.

This has been especially true in Leitrim where many have had the opportunity to develop a greater understanding of Sean MacDiarmada, the Kiltyclogher native who played such a key role in The Rising and was one of the signatories of the 1916 Proclamation.

Among the tributes and commemorations to recall the events of 1916, a group from the National Learning Network under the supervision of Daniel Chester have completed a project that helps educate about the 1916 leader while also creating a lasting memento that is linked, in many ways to the life of Sean MacDiarmada.

Explaining the background to the project that saw participants from the National Learning Network centre in Carrick-on-Shannon create 33 walking sticks from blackthorn, ash and willow Daniel said there were three distinct themes to the project.

He explained the project focuses on three specific themes - remember; imagine and celebrate.

The element of remembrance is focusing on the life of Sean MacDiarmada, the uprising he played such a key role in and his Leitrim roots.

The ‘imagine’ element of the project focuses on challenging assumptions of disability.

It is not widely known that Sean MacDiarmada suffered from polio and used a walking stick up until the time of the Easter Rising.

The 33 walking sticks created as part of the project are a reference to his disability with one stick created for every year of his short life. The sticks emphasise the point that Sean MacDiarmada’s disability was not an obstacle for him in terms of the role he played in the Easter Rising.

The celebration aspect of the project is about showcasing Sean MacDiarmada’s disability and not hiding from it.

As Daniel explained the walking stick was a significant part of his disability and in fact helped the British to identify him.

Having successfully applied for funding, work on the project began last September. Before sourcing the sticks, which were cut and stacked in Drumshanbo, the group went on an outing to Kiltyclogher where they received a tour of Sean MacDiarmada’s homestead and they also travelled to Castlebar for a tour of the Country Life Museum which allowed the group to discover more about day to day life for an average person in 1916.

After the material for the sticks was sourced in Drumshanbo work began on creating the walking sticks which are the focal point of the project as they represent a key part of Sean MacDiarmada's life and is also central to the theme of the project - Diversity over Disability.

The process of sanding and varnishing and then engraving has led to the completed project which consists of 33 magnificent walking sticks. Each stick is engraved with a line from a poem written by Sean O'Sullivan.

Some of the participants in the project explained what being a part of it meant to them.

Mikail Semmov reflected, “It was an interesting project from an historical point of view.

“I am a foreigner so I didn't know much about 1916. We must know our history and projects like this help us to re-educate.”

Seamus Mimnagh was equally enthusiastic when discussing the project saying, “I found the whole project very interesting and worthwhile.”

Similarly Brian Crosbie felt the project was a great learning experience remarking, “I started investigating more about Sean MacDiarmada. I got to know the man during the project.”

Speaking about her experience of the entire project Linda Mahon said, “Your confidence would grow as you are making the sticks.

“Each one of us contributed to making the sticks and we all feel like we did a good job.”

Having completed the project Daniel feels it is important the completed walking sticks are not “hidden away in a museum” and this Sunday, at half-time in the Leitrim v Roscommon Connacht Championship match members of the group will be invited on to the pitch in Pairc Sean MacDiarmada where they will show their hugely impressive finished work to a larger audience.

After the match the sticks will be distributed throughout to various parts of the county as a reminder of the legacy of Sean MacDiarmada and the work carried out by the project participants in the National Learning Network.

To fully celebrate the completion of the project a 32 page booklet will be in circulation in September while it is hoped that more walking sticks will be made later in the year and then sold in the lead up to Christmas.