Raising money in aid of SHOUT 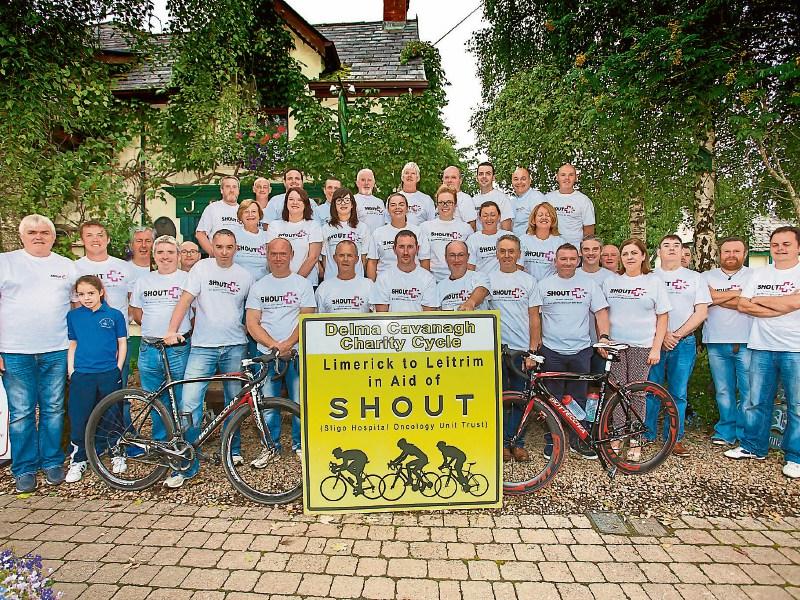 The fourth annual Delma Cavanagh cycle will take place this weekend and will see a group of 44 cyclists and a support team travel from Limerick to Leitrim, raising money for the Sligo Hospital Oncology Unit Trust (SHOUT).

What began with just six cyclists when John Cavanagh first decided in 2013 to cycle from his adopted home in Dromahair to his native Limerick in memory of his mother, Delma, has now grown beyond recognition.

Looking back on how the cycle has grown into the success it has become John laughed, “I never set out for it to be what it is. It started with me wanting to cycle to Limerick. I haven’t asked anybody to do the cycle, they wanted to do it. It creates a great camaraderie amongst the lads going for Sunday spins or midweek spins. People have taken up cycling as a result.”

Year one of the cycle saw John and five others cycle from Dromahair to Limerick but since then they have travelled in the opposite direction to be greeted upon their arrival home by family and friends. The second year saw 15 undertake the cycle and last year there were 25 cyclists, with the group growing this year to 44. John was happy to report that this year there will be seven female cyclists joining the motley crew.

As well as the cyclists there will be a sizable support crew travelling with the group over the two day cycle, that once again will have a variation on the route taken in previous years. Such has been the level of planning involved in the project, John revealed an attempt to block book a hotel last August proved unsuccessful meaning they had to change from the planned hotel.

Last year the group travelled via the Burren and enjoyed some stunning scenery but this year they will be cycling from Limerick to Killaloe then along the western shore of Lough Derg as far as Portumna before travelling on to Ballinasloe. The group will then travel from Athlone and on to Roscommon where day one of the cycle will be completed after 150km.

Before they get to Roscommon the “moving circus” as John referred to the group will stop in at two GAA clubs along the way. As John explained, “The first year we stopped in garages, the second year we ate out of the back of my van. This year I knew that wouldn’t work so we’re bringing a refrigerated van.

The group will be staying in Hannon’s Hotel on Friday night before they get back in the saddle for day two which will see them travel through Lanesborough, Scramoge and Rooskey before they stop for much needed food in Murtagh’s Carrick-on-Shannon. The final leg of the journey will see the group return to Dromahair via Leitrim Village, Drumshanbo and Drumkeerin before arriving home at approximately 3pm.

John has expressed his gratitude to all who have helped in any way with the cycle including Atlas Logistics and Abhainn Logistics who are transporting the 44 bikes to Limerick for the start of the cycle and Glencar Water who are providing the water for the event while Gary Rooney from Gary’s Cycles is providing the back-up van. Although reluctant to name individuals for fear of forgetting anyone John reserved a special word of praise for Sinead McKeon who will drive the lead car and has also been responsible for organising the logistics for much of the cycle.

The cyclists and members of the support crew who will be travelling to Limerick and back will be completely funding their own expenses so anybody who makes a donation can do so safe in the knowledge that 100% of all monies received will be going to SHOUT.

Looking ahead to the possibility of doing it all again next year John acknowledged the cycle won’t be able to get any bigger than it currently is.

“The problem from here is that it can’t get any bigger. You have to allow people who have done it before the first chance so from here on we will probably have a reserve list.”

If you would like to support the cyclists in their fundraising efforts, sponsorship cards are in local businesses or you can visit https://give.everydayhero.com/ie/delma-cavanagh-memorial-charity-cycle.