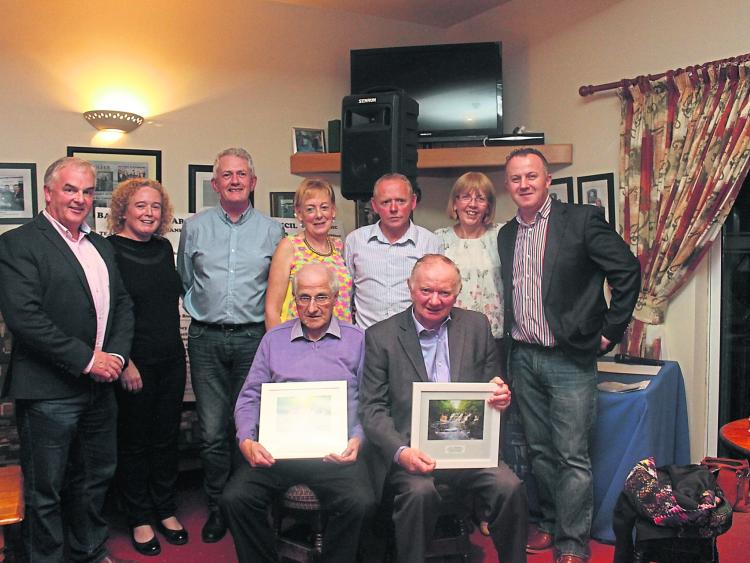 Pictured are the Ballinamore Area Committee.

In 1975 a Community Council was elected covering Aughawillan, Aughnasheelin, Ballinamore, Corraleehan, Drumreilly and Fenagh.
The aims of the council is the social, cultural, and economic welfare of the whole community in the area covered.
They represent the community in dealings with statutory bodies and other agencies in seeking, when considered necessary, technical or other assistance in the promotion of the common good.
The group also assist, where feasible, the local authority in the exercise of it's office in the locality.

Development was their first priority and in sifting through many projects lined up in the area, they decided Poll an Eas had great potential as an Amenity Area.
They decided to purchase an area of four acres around it. The purchase price was borrowed from Ballinamore Credit Union.
They later ventured into the building of the Enterprise Units on Golf Links Road, which created much needed employment and later the Sports Complex to provide sports and exercise facilities for the community.
Recently they assisted with drawing down grant aid for the Community Den.
Other projects included the Playground, Rural Transport, trying to get the R202 upgraded, retention of the Rural Post office etc.

The Community Council said, “Many people have been involved but without the foresight and commitment of Padráig Griffin and Michael Dolan this Community Council would not have survived for over 40 years.”
“It is always dangerous to single out one person but Padráig Griffin must get a particular mention.
“Due to the many, many hours of his time and knowledge, these facilities exist for the entire community.”
Last year Padráig and Michael retired and Máirín Martin was elected Chairperson, with Damien O’Brien being elected Secretary.
Both Máirín and Damien have very large shoes to fill.
Recently a surprise retirement function took place in the Golf Club House where both gentlemen were thanked for their hard work and dedication.

Chairperson Máirín Martin, thanked both Padráig and Michael very much from the entire community, wished them health and happiness for many years to come.
Both men were presented then with framed photos of Poll an Eas in Aughnasheelin – an appropriate gift considering their involvement in that project.
For more information on Ballinamore Area Community Council please contact (086) 154 7788.