Save the longwave for Irish emigrants 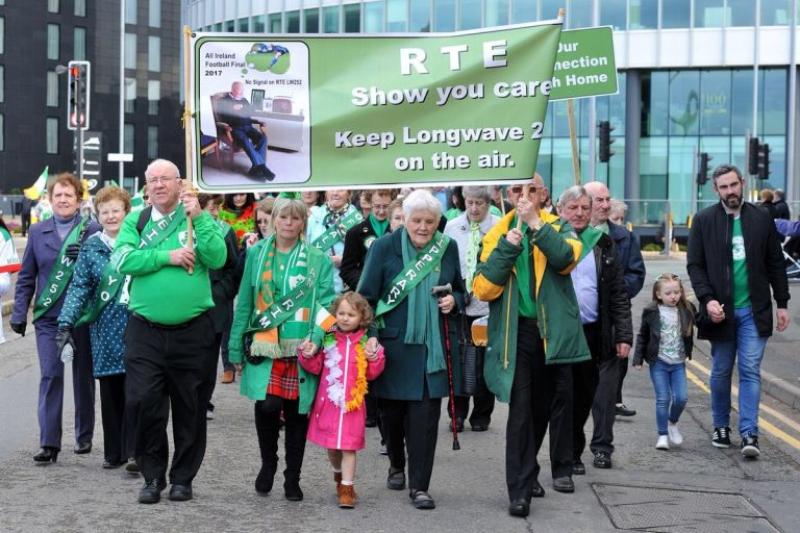 With reports of further cuts to RTÉ and concerns over increasing the licence fee, Leitrim and Irish emigrants in the UK are protesting against any change to their link to RTE Radio One.

In the Autumn of 2014 RTÉ gave one month’s notice of the closure of its Radio One service on Longwave. This shocked many listeners in Ireland, Northern Ireland and even more so in the UK. Subsequently due to public pressure RTE delayed closure until January 2015 and then further until 2017, it is now understood that the changes will not come into effect until 2019.

Leitrim emigrants took to the streets of Manchester for th UK’s biggest St Patrick’s day parade on March 12 to protest any cut to their “last link” to home. Pensioners in their 70’s and 80s marched in support of RTELW252 threatened with closure this coming May.

A government  report engaged 3000+ listeners and more than 90% said that they listen every  day or most days to the longwave station.

RTÉ now say they will introduce a new digital service which will include programming aimed at Irish in the UK.The service is designed to offset the loss of the station's longwave service which is due to shut down in June 2019. Full details of the service have not been clarified.

Enda O’Kane one of the campaigners says if the longwave is pulled people in Northern Ireland will not be able to listen to RTÉ Radio One in their cars. He said older Irish emigrants rely on their service to stay in touch with news at home.

For more details on the campaign visit: http://savertelongwaveradio.com/