We called it first: Ant and Dec were tracing their roots in Leitrim 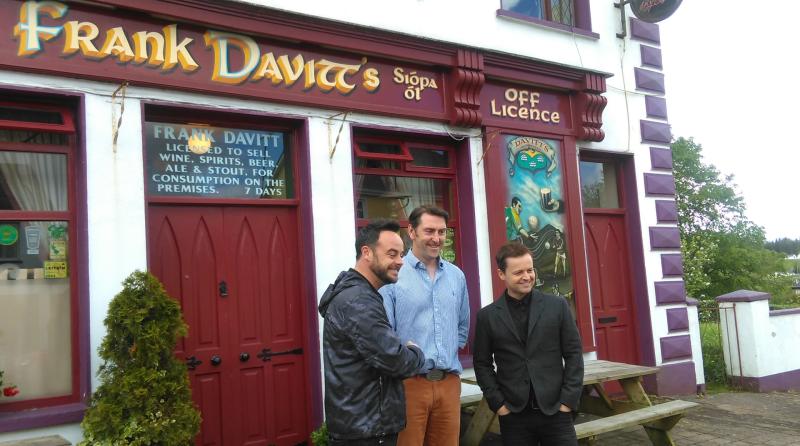 Ant and Dec pictured in Drumkeerin where they met up with staff from the Leitrim Observer.

The Leitrim Observer were the first to call it and of course we were right, Ant and Dec were in Leitrim to trace their family roots.

Ant and Dec created a storm online when they visited Drumshanbo, Carrick-on-Shannon and Drumkeerin last week. The Leitrim Observer caught up with them in Drumkeerin as they headed into Davitt's Bar to film and they told the paper they were in the county to film a documentary. They were tight lipped about the subject of the documentary, but our local sources told us they had been meeting with McPartlins and had looked at church records.

The stars of Britain’s Got Talent and I’m A Celeb have now revealed they were filming for a new show called ‘Ant and Dec’s DNA Journey’.

In a statement from the two on their website they said, "Tracing our ancestors using pioneering DNA methods has been a fascinating and emotional process so far. We have discovered some amazing things which have shocked and surprised us and we still have hundreds of years to uncover! We are looking forward to sharing our journey with everyone."
The ITV show is set to use the latest scientific techniques and genealogy experts to reveal the ancestry of Geordie duo.

Ant and Dec will begin their historical search by providing saliva samples for DNA analysis to show the breakdown of their ethnic makeup and a route map of their genetic pasts.

The show will follow the boys on an emotional journey that takes them across the Irish Sea and beyond as they unearth both their shared and individual histories. This is a modern biography that will give a unique and unseen insight into their lives. Along the way they will be joined by family members as well as meeting long-lost distant relatives.

And in a unique twist, the show will culminate in a big reveal in which the best friends discover if either has blue blood - or if they are actually from pauper stock.
Informative on-screen graphics will also bring alive the cutting-edge DNA science behind the show.

The show, which will feature Leitrim, will reveal if any And and Dec's ancestors are still alive in Leitrim.