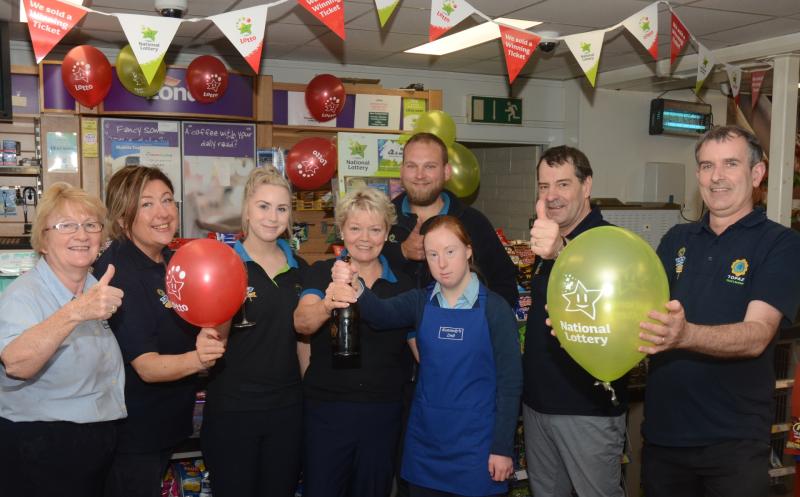 The mystery is over, the €2 lotto ticket bought in Kennedy's, Carrick-on-Shannon earlier this month was collected yesterday, June 13 by two Kildare brothers.

The lucky men told how their elderly mother, a Lotto devotee, was given the job of checking their ticket as the draw was televised live on RTE One on Wednesday May 31st.

“Every week religiously our mother sits in front of the tv and circles the winning numbers on her lotto ticket as they are called out. It’s a ritual for her. We rarely play the Lotto so we gave her our ticket to check. We were in the kitchen and she ran in from the sitting room screaming that we had six numbers and we had won the jackpot. We were absolutely stunned," the said.

It was a massive stroke of luck for the brothers, who purchased their winning ticket while getting petrol at Kennedy’s Topaz in Carrick-on-Shannon as they passed through the Leitrim town.

“When I got out of my car to get petrol in Carrick-on-Shannon, my brother leaned over and gave me €2.50 in change and told me that we should go halves on a Lotto ticket. He is an absolute genius!” grinned one of the brothers.

“It can be sometimes annoying in our house if we are watching a live football game on TV and our mother will insist on switching the channel for a few minutes to watch the Lotto draw. But we won’t complain again!”

The two young professionals, who want to keep their massive win private, are planning to take some time out before deciding what to do with their new found fortune.

“We are both millionaires! That’s going to take a lot of getting used to. We’re going to be sensible for the time being and take some time out before we make any decisions. We’re going to enjoy some very quiet celebrations with our family over the next few days and then decide the next steps,” they added.

The owner of the winning shop, Kevin Kennedy, said he is delighted that the winners have come forward. “There has been a great buzz in the shop since we sold the winning ticket. We wish the brothers the very best of luck in the future.”

Want to share that winning feeling? Tonight’s Lotto jackpot is an estimated €3.5 million. Play in store, on the National Lottery App or online by 7:45pm this evening for your chance to win.