For the love of language : 10 years of Gaelscoil Chluainím 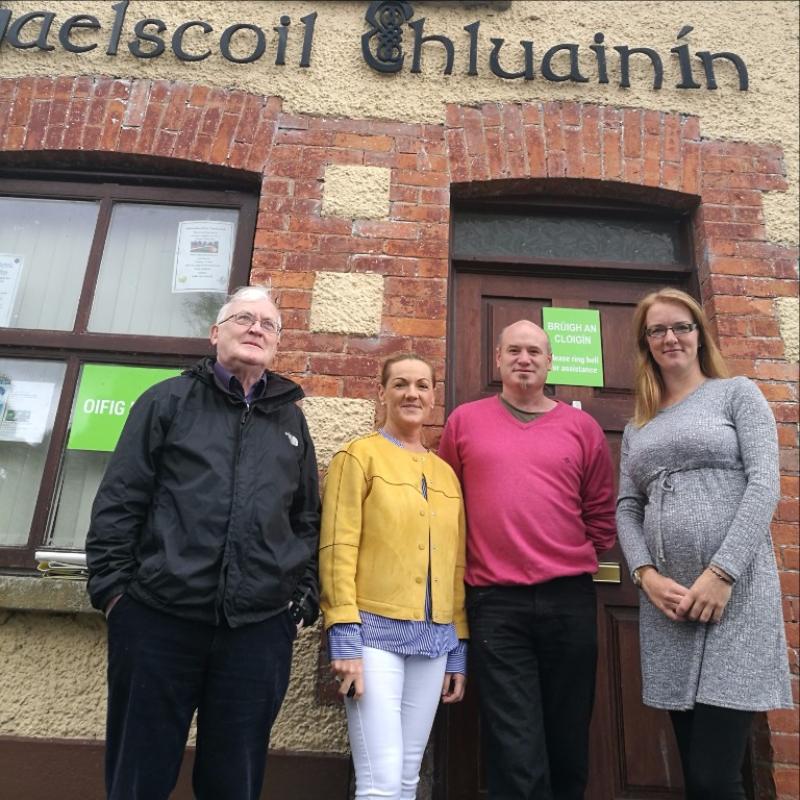 What do you get when a group of passionate people in Leitrim come together with a dream for the Irish language in 2006? You get a gaelscoil now celebrating its 10th birthday in Manorhamilton.

When Rossa O Snodaigh From the band Kíla landed in Manorhamilton ten years ago the town had everything he could ask for, apart from a Gaelscoil.
As a committed Irish speaker, he grew up in a house full of boys in Dublin whose father spent five years as president of Cumann Na Gaeilge with an ethos of promoting the language. You might have thought the lack of an Irish language school could pose a problem. But that was not to be the case.

O Snodaigh relives what he said to himself “Sure I’ll set one up. People have had to set them up in the past.”
He laughs citing an old Garfield quote recalling the blind faith belief that somehow it would get done.
“Its amazing what you can do when you don’t know you can't do it!”
In a time when Irish is listed as an endangered language Leitrim with its two gaelscoils is taking great strides to rectify that in its own small way.

At the height of the Irish language revival there were 623 schools teaching through Irish. Leitrim was up there with the best and Ó Snodaigh found through research it was one of the leaders in the country, with three Irish speaking schools in the 1950s.
But a later national shift of ethos meant numbers were about to decline. When the Gaelscoileanna movement was set up in 1973 schools were at an all time low according to Ó Snodaigh.
A recent rise in popularity of Gaelscoil's has seen an increase but nowhere near that earlier peak. According to Gaelscoileanna statistics there are currently 146 Irish schools in the Republic of Ireland and a further 125 in Gaeltacht areas.
While many parents wish to protect the language and culture, teaching your child through Irish has been linked to positive impacts for the learner. Research has found that it increases cognitive flexibility and creativity, attention and memory. It is also found to assist in the pick up of another language.
Taught using non-verbal cues its also suited to those whose first language is not English. Research from January 2017 cited by the Alzheimer’s Association in Britain shows bilingualism and resulting brain connectivity has a protective effect against dementia, delaying it by almost five years. 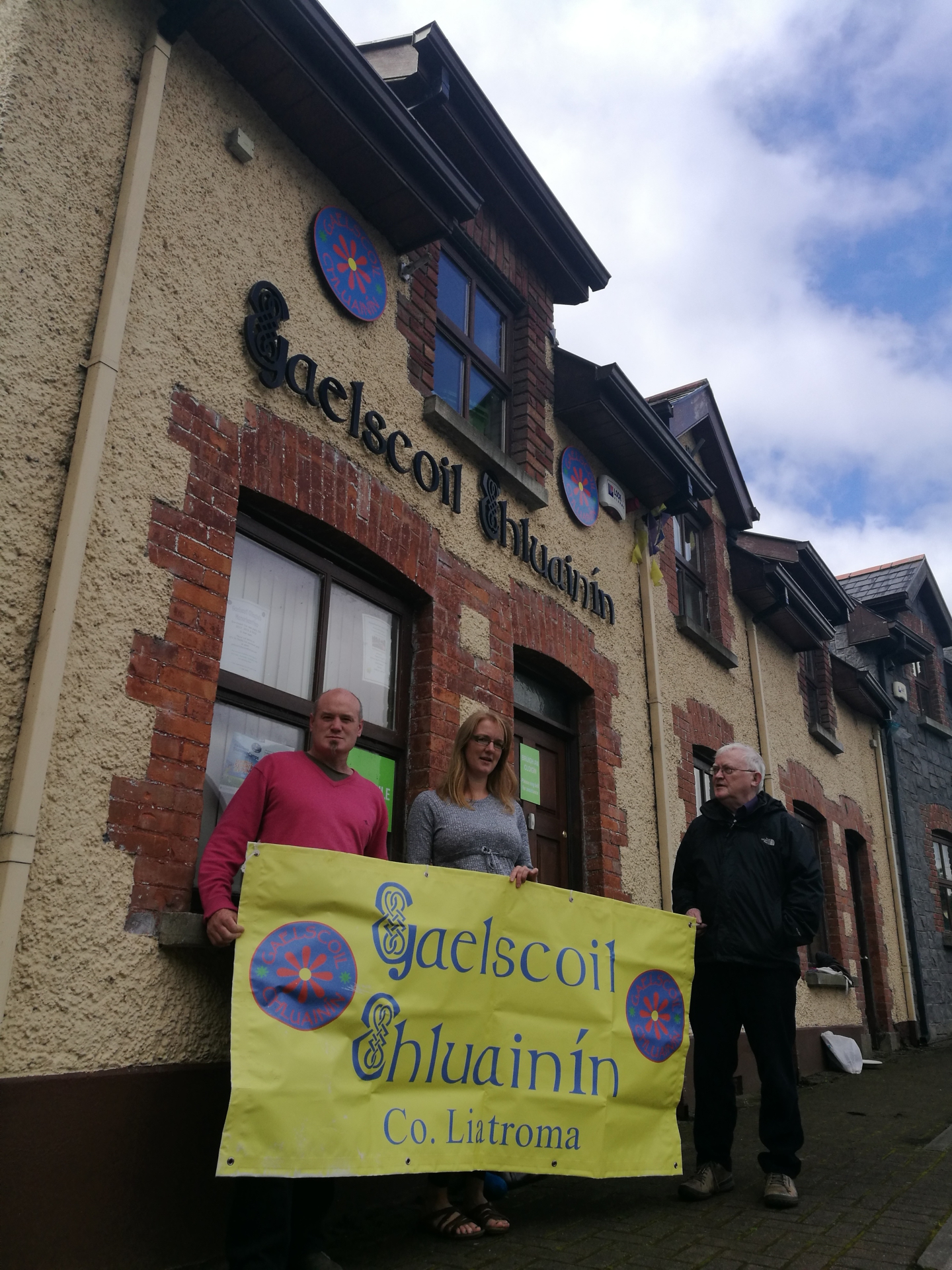 Back in 2006, it turned out that Ó Snodaigh would be pushing an open door, when he was to meet like-minded people, both local and newly arrived that would be pushing that door with him.
“It was a perfect storm,” says another of the founding members Mairead Higgins.
“Things were just right. People had been feeling the same way for a while. We had a dream; the 10-year anniversary is a real good news story for us,” she said. That perfect storm saw conditions that were ripe for the school. A large influx of people into the area in the Celtic Tiger era saw a scarcity of school places, a need was there and a community including the existing schools worked together for it.

There was positivity toward the language in government policy at a time of greater resources. Gaelscoil Chluainín was to become one of the fastest established in just over a year from the first meeting of the committee in June 2006.
Manorhamilton became the smallest town in Ireland to have its own Gaelscoil.
Prin Duignan, Chair of the committee recounts the buzz 10 years ago that saw spaces like the Sculpture Centre and the Glens Centre form alongside it. He sees the school alongside those places as having a great role of assimilating people in the town and creating the vibrant healthy place it is today.
Principal Sinead Ni Thorsnaigh echoes that sentiment. The school, she says, is very representative with a healthy mix of different religions, income levels and ethnicity. “We are now representing the Ireland of today.”
Principal Ní Thorsnaigh who was instrumental to the success of the Gaelscoil, was there from the beginning too. She was to spend 20 years in the Gaeltacht Colaiste Chamuis in Connemara, awarded a scholarship as a student and then ending up teaching there.

Her passion continued as she was seconded to help roll out the “Primary Curriculum Support Program” encouraging the importance of Irish as a spoken language.
The school was to become one of the first to be awarded the Health Promoting Schools flags, an initiative promoting positive mental heath, lifestyle, diet and anti bullying. Their school garden now bears strawberries, and potatoes, along with sunflowers. This year they even had a bumper crop of butterflies as the children nurtured them from caterpillars. She noticed children with special needs gained so much from this activity of working together with their peers.
“Our ethos is inclusivity as gaeilge. We welcome all walks of life. We have one thing in common - Gaeilge.”
The ten years haven’t come without challenges. Keeping the popularity of the school numbers like many rural schools remains a challenge.

Irish has suffered negative perceptions from the Peig Sayers days often reflecting how it was taught historically. There is a consensus that key to language revival is to speak it.
Ní Thorsnaigh believes that even more emphasis on the spoken element in final years exams in secondary school could have a bottom up effect with an increased emphasis on the Irish language in primary school.
Ó Snodaigh would go as far as suggesting that “if we are serious about our language all schools could be changed to Irish schools to combat that endangered status, and for all children to get the benefits of a model of bilingualism.” His opinion is backed by commentators like Ger Colleran and the Union of Students in Ireland.

Gaelscoil Chluainnin now has 81 students and employs eight staff. A secondary school Coláiste Loch Gile grown from the school is due to open in September in Sligo and plans are afoot for a preschool, Naíonraí.
“Leitrim is now on the map when it comes to Irish. For a small county, we deserve to be proud.”
For info on the school and enrolment phone 071 9856046 or email gaelscoilchluainin@eircom.net