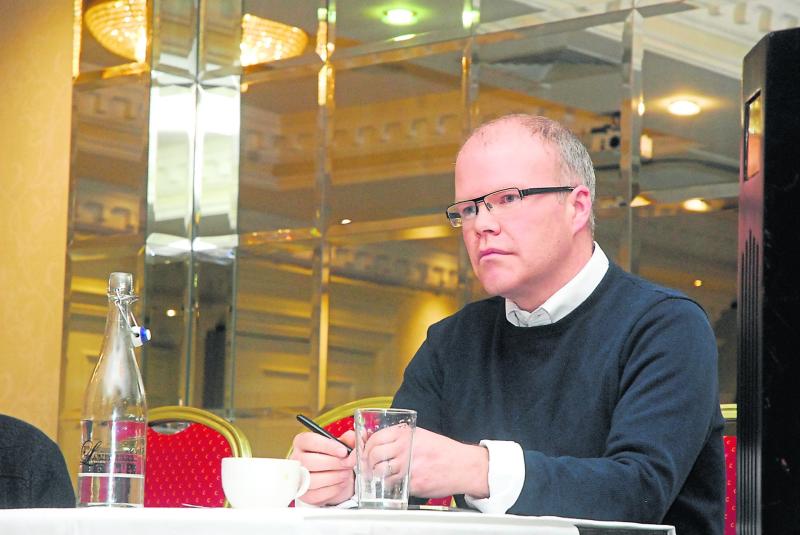 There’s a real problem with Irish politics; Irish politics is broken as far as I’m concerned,” that’s the stark message being advanced by Peadar Tóibín, leader of the new all-Ireland political party Aontú.

The former Sinn Féin TD from Meath was in Carrick-on-Shannon to put forward his vision for political representation.
He sees an Ireland where between 30 and 40 per cent of the population are being ineffectively represented on a whole range of issues by the political parties in Leinster House.

Aontú is now actively seeking the support of those people in the various political parties whose grassroots views are being ignored by their leaders who Mr Tóibín says are taking their parties in a completely different direction from their grassroots support.

“Right now you have all of the political parties in the establishment all congregating on exactly the same points of view on a range of different issues,” Mr Tóibín said.

“There is a big chunk of Irish society who don't have representation on a range of issues amongst the political parties currently in Leinster House.

“But the other issue is the political culture in Leinster House of the finger in the air, basically the idea that politicians will simply follow the crowd all the time, they'll go with the flow, they won't stand up for what they believe in, they won't have a backbone whatsoever. So what we're trying to do is change those two political cultures,” he said.

“There's nobody developing a concerted response to the damage the government is doing and that would be our objective,” he added.

So the tenets of his political vision are representation for a large portion of Irish society and allowing respectful debate on a range of different issues.

“People don't have to keep their heads down,” he enthused, “they don't have to feel censored or that the thought police are going to stop them getting involved in debate. Everyone needs to be able to participate respectfully in debate,” he said.

Asked if he was specifically targeting people within existing political parties to readjust their thinking and not toe the party line, he admitted that people are now being drawn to Aontú who were involved in political parties, particularly Fianna Fáil, Sinn Féin and the SDLP, for the past 15 or 20 years.

“But politics is not a social club, it's not a football team, it's far more important than that and if you're still a member of a political party that's doing damage to your core values, well the truth is you're complicit in that damage, you have to realign your politics with a political organisation that represents your views,” he stated.

Mr Tóibín is a former Sinn Féin TD who resigned from the party last November after opposing the party whip on the Health (Regulation of Termination of Pregnancy) Act 2018.

Mr Tóibín said the majority of people coming to them are from the three parties mentioned above but there are also people from Fine Gael and the Independent ranks who have come onboard.

Mr Tóibín took particular aim at the current government and their confidence and supply partners in Fianna Fáil.

He described the current arrangement as being “dangerous for the country” and said: “it spells the death knell for Fianna Fáil because Fianna Fáil are now complicit in the damage that is being done to so many people.”

He admitted there are people doing well in the country, but he again returned to the sizeable number of people who are not, in his view, being properly represented.

“I believe at least half the population are locked out of Leo Varadkar's Ireland and we want to represent them,” he said.
Mr Tóibín accused Mícheál Martin's Fianna Fáil of giving the government “a free pass” on so many issues.

Including the meeting in The Landmark Hotel, Aontú had held 24 such meetings around the country with over 4,000 people attending.

There were just over 60 people present in Carrick-on-Shannon but Mr Tóibín was enthusiastic about the reaction he has been getting.

He said a couple of hundred people are signing up membership on a weekly basis, new cumainn are setting up and they party has been joined by nine existing elected representatives coming from the SDLP, Sinn Féin, Fianna Fáil and Independents.
With local elections due to be held in May, he stated it is their intention to put forward candidates.

“Our first objective is to build a grassroots organisation around the country. We want to be known for our activism. We want people to be able to get involved in local cumainn and start campaigning on the ground and then from those people we are going to select candidates for the next local election.

“So I would hope we will have a range of candidates here in Leitrim in the near future and that we will be winning seats in Leitrim,” he said.

The name Aontú, which is the Irish for unity, was chosen for a good reason, he said. “We believe Ireland is probably at its most divided now than it has been for a long period of time, it's divided north and south.

“I think a lot of people who mightn't have been traditionally interested in a united Ireland are starting to understand that it's crazy to have the whims and the egos of the Tories in London deciding what happens in our country, whether we can economically develop, whether we can move people or products or services around the island, and people are seeing the logic of self-determination for the Irish people north and south.

“To me one of the biggest and one of the most shocking divides is we're divided east and west. The country is becoming a city state at the moment,” Mr Tóibín said.