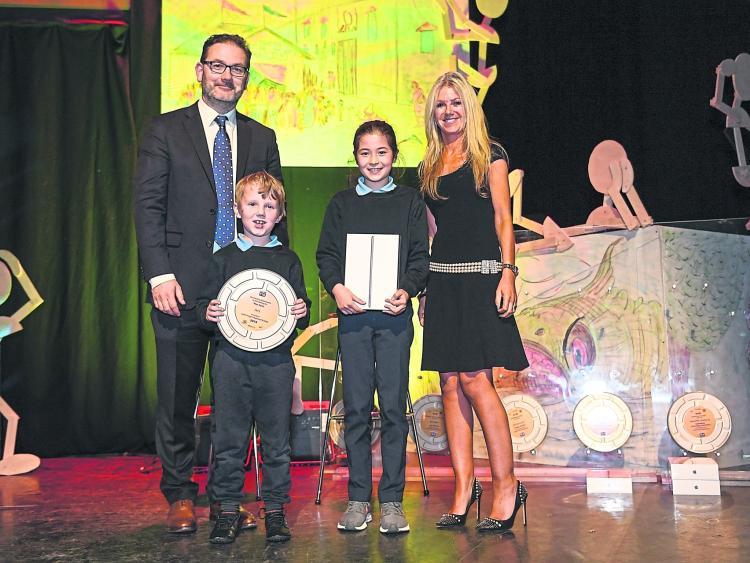 St Hugh's National School, Dowra were awarded for their outstanding achievements in filmmaking at the 15th annual FÍS Film Awards which took place at the Helix, DCU, Dublin yesterday.
Hosted by RTE’s Sinead Kennedy, the project, which introduces young students to all aspects of the film-making process, helps children develop teamwork, communication and technological skills. It also assists primary school teachers in enhancing critical thinking, problem solving, investigation and analysis in the classroom. The initiative is aligned with the Government’s digital strategy for schools, an action plan for integrating ICT into teaching and learning assessments in the classroom.
Over 900 enthusiastic young film buffs attended today’s ceremony, which was hosted by the Professional Development Service for Teachers (PDST TiE) and the Institute of Art, Design & Technology (IADT).
St Hugh's received the Outstanding Achievement Award for Plot Twist for short movie '1915'.
FÍS 2019 also saw the introduction of a new special category award: Dáil 100 in collaboration with the Houses of the Oireachtas. Dáil 100 encouraged schools to make films that commemorate the anniversary of the first Dáil, to celebrate its legacy and educate themselves and others about parliamentary democracy.
The awards were presented to students by Ciara O’Donnell, National Director of the PDST and Head of Dept. of Film & Media, IADT, Rónán Ó Muirthile for Outstanding Achievement in Film Making for categories such as: Acting, Production Design, Animation, Direction, Costume, Cinematography, Special Effects, Best Newcomer, amongst others. Awards were also made for curriculum relevant films: wellbeing, history, geography and science subject areas.
In addition, Guest of Honour, Dr Annie Doona, Chair, Screen Ireland & President, IADT announced the prestigious Aileen MacKeogh FÍS Film of the Year 2019 award at the annual FÍS Film Awards Ceremony where schools from across Ireland were honoured for ‘Outstanding Achievements in Film Making’.