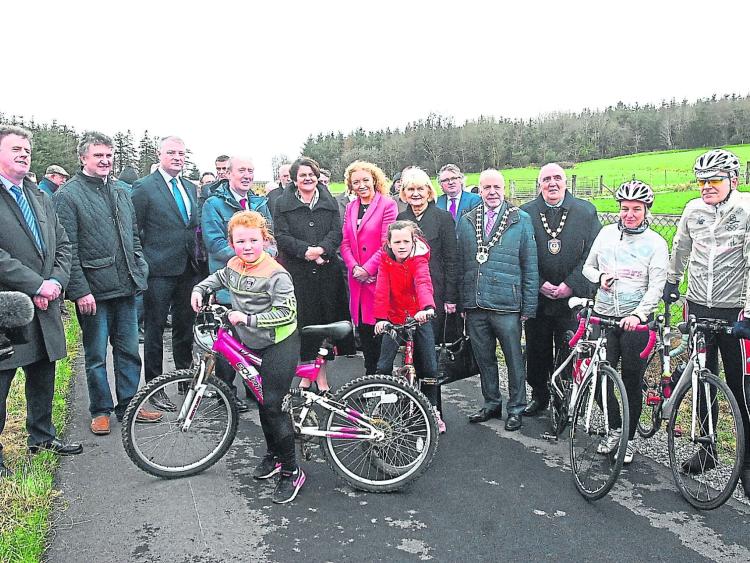 A demonstration stretch of the greenway was opened in 2019.

The importance of securing progress on projects such as the cross border Greenway has become even more obvious in light of the current pandemic say local councillors and Oireachtas members.
The proposed Sligo, Leitrim and Northern Counties Railway (SLNCR) Greenway is planned to run along the former SLNCR line covering 72 kilometres costing an estimated €11m to complete over an estimated seven years period.
The proposed rail trail will convert the disused railway route between Collooney and Enniskillen into a multi-use rail trail for cyclists, walkers and the mobility challenged. Starting at Collooney it will pass through Ballintogher, Dromahair, Glenfarne, Blacklion and Enniskillen.
Sligo and Leitrim County councils as well as Fermanagh and Omagh District councils are all backing the project.

The Greenway project is considered a cornerstone for securing tourism growth in not just Leitrim, but across all the counties involved in the project.
A cost benefit analysis by Leitrim County Council said that, once complete, the Greenway is expected to provide an economic boost in the region of €7m locally in its first year of opening.
The Greenway is also expected to have the knock-on benefit of creating 227 full time jobs in the area as well as providing 100 jobs during its construction.
Chief Executive of Leitrim County Council, Lar Power noted that the Greenway project is specifically mentioned in the Northern Ireland Assembly document and stressed the importance of securing a similar status in the Republic.
He said the SLNCR Greenway is a huge project but added that Leitrim County Council has ensured that all background work has been done adding they are "ready to go out of the traps if funding is made available".
Funding from Transport Infrastructure Ireland allowed for the development of a 2km demonstration stretch of Greenway along the N16 from Cornacloy to Sradrine in North Leitrim in February 2019.
However councillors told last week's meeting that now is the time to secure funding for the further progression of this Greenway project.
Last week members of Leitrim County Council and Oireachtas members had the opportunity to speak with those behind the Waterford Greenway about the benefits brought by the project.
Local members said they hoped to see a similar success story in Leitrim.
Cllr Sean McDermott spoke of the huge potential in the Greenway project pointing out that this infrastructure could provide a “kick-start” for the economy needed in light of the current pandemic.
Cllr Felim Gurn stressed the need to secure funding for this Greenway as soon as possible noting that the pandemic has also seen a growth in people in urban areas cycling and walking - “I hope we don't lose out to urban areas or to areas like Kerry crying the poor mouth about falling tourism numbers ,” he said.
The Independent councillor pointed that the potential of having a junior ministry position in the North West in the new Government would be a huge bonus for the region adding “otherwise we'll be left further behind”.
“We need to see the Greenway here in North Leitrim,” agreed Cllr Padraig Fallon, who said the clear benefits of the project made it vital for counties like Leitrim and surrounding areas.
The Oireachtas members added their support to the project and said the information provided by those involved in the Waterford Greenway project had been illuminating.
Deputy Marian Harkin said she had not “fully realised the potential of the Greenway” for the region.
“It is crucial to see the money granted for this,” she said.
Deputy Frank Feighan noted the “huge opportunities” for the region arising from the provision of this Greenway project and he said it was vital that the North West secure this project and link up for promotion with other Greenways.
Deputy Marc MacSharry agreed the SLNCR Greenway project is "vital" for the region. He said that the project is "a no brainer as it can open up four counties and increase tourism" and stated he is in full support of the project.