Red-letter day for parishioners with renovation and re-dedication of St Patrick’s Church, Drumshanbo 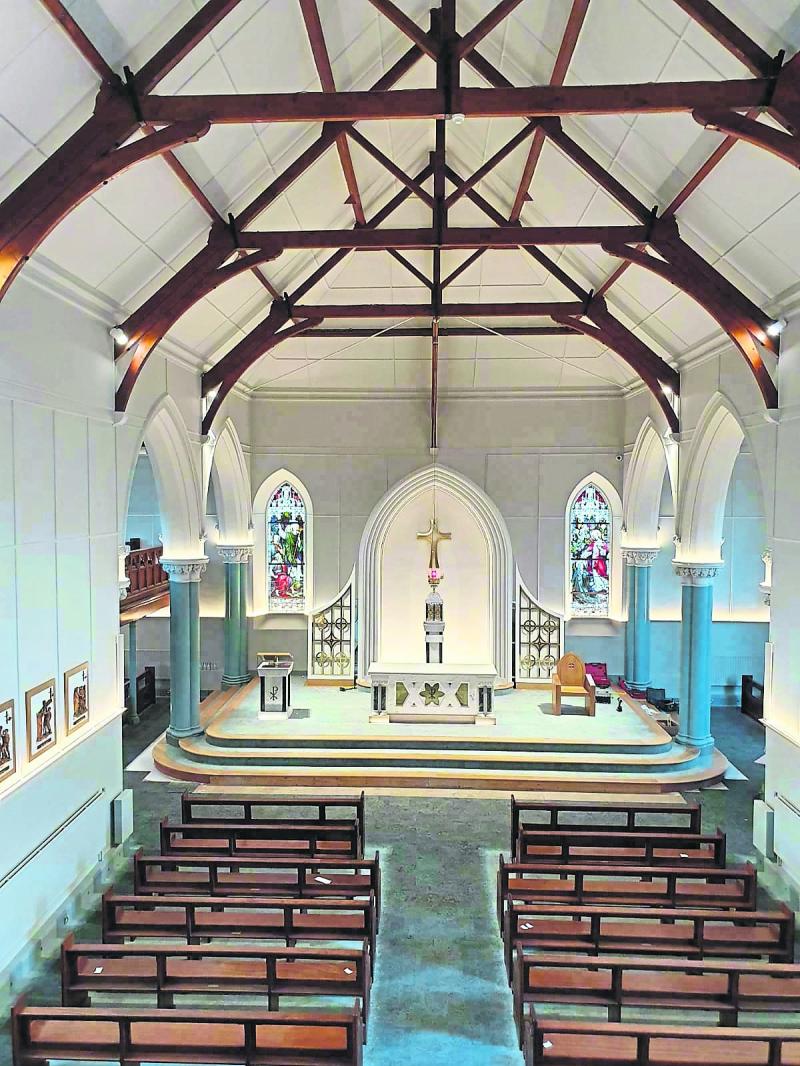 the inside of the beautifully renovated St Patrick's Church in Drumshanbo

Sunday, October 4, 2020 was a red-letter day for Catholic parishioners in Drumshanbo when Most Rev Francis Duffy, Bishop of Ardagh and Clonmacnois re-dedicated the recently renovated St Patrick's Church which celebrates its 175th Anniversary this year.
This joyous occasion was tinged with some sadness because the participants and congregation had to be restricted to a total of fifty people due to the present Covid-19 pandemic restrictions.

Renovation of Church
The renovations took place from April to the end of August this year. As with a previous, more major renovation in St Patrick's Church in 1950-51, Mass had to be celebrated in the local hall rather than in the Church.
In 1950-51, Doherty's Hall, at the end of Church Street (opposite St John's Church of Ireland) was used. In 2020, the Mayflower Community Centre was used for the celebration of Mass until the worsening Covid-19 virus situation compelled Mass to be broadcast globally on the new Parish Webcam from an otherwise almost empty Church. As you know, an exception was made for funerals and some other services where numbers attending were drastically reduced.
The recent renovations consisted of a new lay-out / re-positioning for the altar, the baptismal font, the choir galleries, access points, lighting, seating, a disability access, toilet facilities, a modern sound system, a webcam system for online broadcasting of ceremonies.
The major contractor for this very challenging project was Shane McGovern (Drumshanbo) and his highly-skilled, hard-working staff. Thomas Flynn (Architect and Lighting Design, Drumcong), Ronan Tiernan (Electrician, Drumshanbo), Gavin Duignan (Irish Church Furnishers, Dromod), Alan Dunne (Sound Equipment, Carrick) and Breege McGovern (Pat's Carpets, Carrick).
The members of Drumshanbo Parish / Pastoral Council who ably assisted Fr. Murray in their shared vision and dedication in undertaking and completing this project are : Enda McGloin (Chair), Gerry Mulvey (Vice-Chair), Martina McGowan (Secretary). Committee members: Sister Helen, Sheila Moran, Mairín Heron, Moira McCaffrey, Fiona McKiernan, Ann Flood, Ann McMorrow, Jennifer Lenihan, Kevin Finn and Mickey Clerkin.

Re-dedication of Church
As stated earlier, Most Rev Bishop Francis Duffy, celebrated Mass in St Patrick's Church on Sunday, October 4, and addressed the congregation and those watching on the Parish Webcam.
Later, he blessed and re-dedicated the newly renovated Church. He was assisted by Fr. Frankie Murray, Drumshanbo, P.P. who also addressed the congregation, and by Fr Tony Gilhooley, CC, Longford, a native of Drumshanbo. Fr Tony delivered the homily, and Sr Helen introduced the Ceremonial Proceedings and read the Communion Reflection.
Rosie Canning and David Harding read the first and second Readings. This Mass was also the Anniversary Mass for Rosie's late husband, Brendan, who died in 2017.
Róisín McCauley read the Prayers of the Faithful.
The Parish's three Choirs - the Adult, Children and Folk Choirs, performed very impressively, despite their seriously reduced numbers, due to Covid-19 restrictions.
The Adult Choir was represented by Orla Daly (Director / Organist), Natascha Dietz (Violinist), Charlie and Goretti McGettigan, Stella, Edel and Camillus Kehoe and Paula O'Neill. The Children's Choir was represented by Máirín O'Keefe (Director / Pianist), Éthán O'Connell (Cello) and Eibhlín O'Connell (Concert Flute). The Folk Choir was represented by Michael McKenna (Director / Guitarist) who sang a beautiful hymn / song entitled 'This Holy Place' that he had composed specifically for the occasion.
The First Holy Communion Ceremony had taken place on the previous day, and two members of The Communion Class, Megan Hopkins and Evan Rowe, represented their co - communicants in presenting a St Patrick's Medal to Bishop Duffy at the Re-dedication Ceremony on the following day.
Similarly, Róisín McCauley represented her Confirmation Class colleagues who were confirmed last month.
Bishop Duffy presented Carmel McGrath, the Church Sacristan since she succeeded her father, Tom Joe, in 1993, with the very prestigious Papal Medal, the Bene Merenti Medal, for, as Dessy Doyle wrote in his tribute to her, “In recognition of Carmel's outstanding loyalty and dedicated service to church and parish.”
The late Minnie Conway, NT and Conductor / Organist for Drumshanbo Choirs for decades, also received a similar Papal Award in 1978 for her devoted service to the church and parish.
At the Re-dedication Mass and Ceremony, Camillus and Stella Kehoe, Curraghill, Drumshanbo were honoured in representing all of the couples who have held their weddings in St Patrick's Church, and who are celebrating special wedding anniversaries this year. This year, Stella and Camillus celebrate their 50th (Golden) Wedding Anniversary. Congratulations to them.
Similarly, congratulations were conveyed to Helen and Bernie McCauley, Mahanagh, who celebrate their 60th (Diamond) Wedding Anniversary this year. They were represented by their granddaughter, Róisín McCauley at the ceremony.
A very special expression of gratitude to our Parish Secretary, Rosalie Logan and to Sister Helen for the huge amount of work they did, behind the scenes, in the preparations for this blessed, joyful, historic occasion.