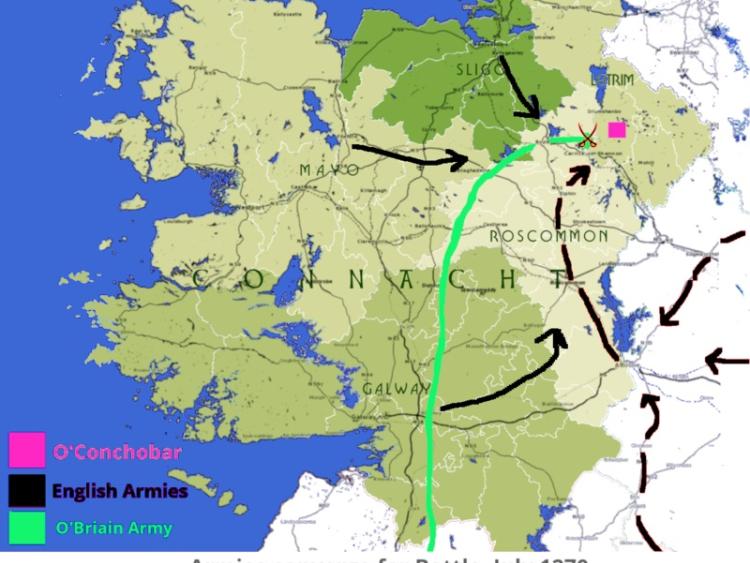 Seldom has a victory been so successfully erased from the history books as the Irish victory over the Normans at the Battle of Áth an Chip in August 1270, according to Noel MacLochlainn, author of the 750th Anniversary of the Battle of Connacht.

Exactly one hundred years after conquering, and settling most of Ireland, Normans gathered to crush the defiant gaels of Connacht.
A massive army of knights and foot-soldiers, led by no less than the Justiciar of Ireland, marched through County Roscommon, over the River Shannon, into south County Leitrim.

Following days of drama and skirmishes, the Gaelic champion Aedh O'Conchobar launched a surprise attack, wiping out the entire Norman army at Áth an Chip.

Here, for the first time, the iconic Battle of Connacht at Áth an Chip, and the heroic leadership of both Aedh O'Conchobar and Turlough O'Briain can be revealed.

Noel MacLochlainn is chairperson of the commemoration committee and author of the book: Battle of Connacht 1270: Aedh O'Conchobar's victory at Áth an Chip (Conmaicne, south Leitrim).

Noel is keen to publicise his documentary work and to highlight what the county looked like 750 years ago.

“I would really like local people to know these resources exist, how certain places got their names, and how the landscape of south Leitrim still echoes the memory of the battle, the biggest event to ever occur in county Leitrim, and one of the largest recorded medieval battles,” he said.

A 90 minute documentary is available on Youtube entitled: “The 750th Aniversary of the Battle of Ath an Chip by Noel MacLochlainn”.

And, a book "Battle of Connacht, 1270" is available in some local bookshops and Amazon.

Researchers into these events were: Robert Lee of Cortober and Dublin, Frank Whitney of Port, and Noel MacLochlainn of Mackan, both from County Leitrim.

President Michael D Higgins has received a copy of the book and has been invited to visit a commemoration in July 2021 or 2022 in Roscommon and Leitrim.