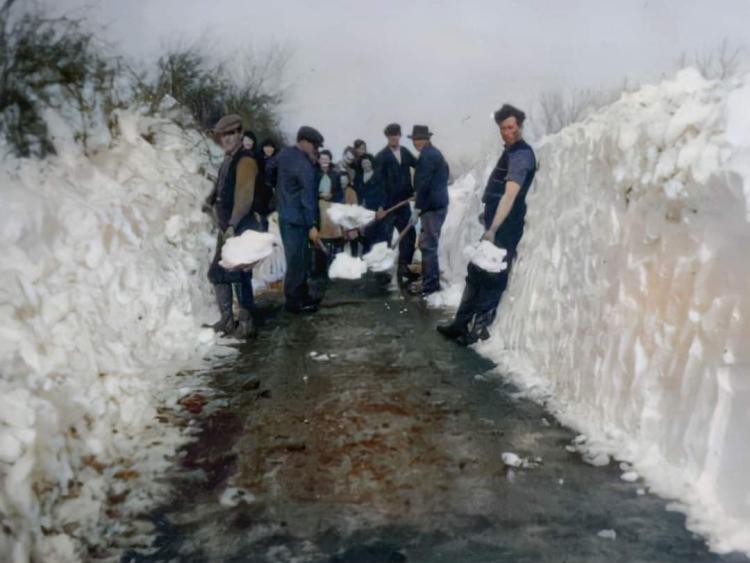 Andy McGovern recalls the greatest snowstorm of the last century which took place in February 1947 when he was just fourteen years old. “I'm all ears when I hear that 'The Beast from the East' is on it's way.”

The greatest snowfall of the century began on the night of Monday, 24 February 1947. The memories flood back as I think of the time I was a fourteen year old.
For weeks before, an arctic easterly wind had been blowing across the land and snow was the topic on everyone’s lips. As I went to bed that night, the first flakes were beginning to fall. It continued to snow for twenty-four hours non-stop.
When I looked out the next morning I could barely recognise the farmyard or the countryside. Hedges and bushes looked completely different and some had disappeared entirely. It was still snowing heavily.
The snow of 1947 is on record as the greatest snowstorm ever witnessed in Ireland.

I remember it as if it was just last year and I have never seen anything like it in the past 74 years.
At first the snow started to fall like salt, very fine. The blizzard was driven by a fierce easterly wind that swept the countryside. It paralysed road and rail services and brought all traffic to a standstill.
Similar conditions were being reported all over the country, with huge snow-drifts, some up to fifteen feet high. Everyone thought this was the end of the cold spell and that snow at this time of year wouldn’t last long and that spring was just around the corner.
But what a shock we got.
It was impossible to get to some dwellings but, as ever, the bond between neighbours manifested itself.
People struggled to visit the next-door neighbour and so on, until everyone was accounted for. It was a task even to get to the animals in the outhouses and water became scarce because of the frozen ground. We took buckets of snow into the kitchen and melted it on the fire. You would be surprised at the small quantity of water produced by one bucket of snow and then, how could such nice, white, clean-looking snow produce such dirty black water.

People began to face hardship
As the weather worsened, people began to face hardship, especially farmers who were running out of fodder. Because of the general scarcity of fodder, anyone who had hay for sale was getting whatever price they asked. Even the crop left over from 1945 sold well and hay reached the highest price in living memory, £1 per cut.
It was a great time to be young. We really enjoyed ourselves, getting up early every morning, hoping the snow had not disappeared. There was no danger of that.
It froze hard every night, so we could walk and run on top of the snowdrifts. We made a sleigh from an old kitchen chair with a broken back and, taking turns, we slid down a long hill on it. It was great entertainment but bringing the sleigh back up the hill again demanded both strength and energy.
The exercise warmed us, although our noses were red and our hands blue with the frost. When we eventually went into the house, the pain started in our fingers.
Our laneway had snowdrifts eight feet deep on every bit of it but it made no difference as we could walk safely on the top of the drifts. With each passing day, the footpath got harder.

It was impossible to go anywhere
I hear people say that 2010-11 was the worst winter on record and I try to tell them about 1947 but they won’t listen.
They tell me about their burst pipes, lack of electricity, that the car wouldn’t start and that it was impossible to get it up the hill. I smile to myself, thinking that, in 1947, there were no burst pipes or electricity cuts, no car, no toilets, no running water. The lucky few may have had a car but they could not find their car as it was completely covered for at least a few weeks and even when they found it, it was impossible to go anywhere.
During the snow the roads were all blocked and no supplies came to the shops.
Leitrim County Council had workmen out clearing the roads and there were also many voluntary workmen and even children helping, enjoying the novelty. 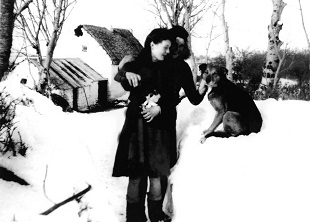 Eileen and Josephine Gilhooly pictured with their cat ‘Smut’ and dog ‘Captain’ outside their house at Flaughanagh, Dromahair during the ‘big snow’ in 1947. This photo was taken around March 1 – courtesy of Leitrim County Library Photographic Collection

A new form of community news was established: people started writing in the snow
There were no newspapers in the shops and we missed our weekly Leitrim Observer. Radios were in short supply. The batteries ran down and there was no way of taking them to town to have them charged up again.
So a new form of community news was established: people started writing in the snow all along the roadways. You could write or read anything there and it was all anonymous.
At that time, courting couples would try to keep their friendship secret but if someone got to hear about it, they released the news for everyone to read along the road.
I knew of two women in our district that used to walk for miles every day just to read about who was going out with whom or any other bit of juicy scandal.
The person who didn’t want their courting to be exposed in this manner had to be out early in the morning and drag a stick along the writing to get rid of it. The writing was there for weeks and become easier and easier to read as it was enlarged by each night’s frost.
I smile when I think of today’s cyber world. 74 years ago we had our own Facebook in the snow.
When the snow finally disappeared in mid-April, all this communication was deleted, the writing became a distant memory and no one took offence for too long.
The self-sufficiency of the rural people came into its own at the time of the great snow.

Abundance of good healthy food
There was an abundance of good healthy food: potatoes, eggs, vegetables, oatmeal, milk and home-cured bacon. When the potatoes in our barn came to an end, we had to go to the field and open the heap of stored potatoes.
Firstly, it was hard to find the heap; then it had to be attacked with sledgehammer just and crowbar to get it open. These potatoes had been stored in the heap since the previous October. They were covered with straw or bedding, then with about nine inches of clay in the shape of a pyramid. The people knew that their very survival depended on the preservation of this vital crop as there was no St Vincent de Paul to call upon. It was a weight on my father’s shoulders, with several little mouths depending on him.
After some time, we found the heap. It took another hour to make an entrance. Still my father worried that potatoes would have been destroyed by frost. Finally, he reached the bedding and to his delight, not one potato had been frostbitten.
We brought home a supply of lovely Kerr Pinks to last us for a while. We secured more bedding at the front of the heap and rolled back the big squares of earth for further protection.
As the frost continued day and night, we had to go again and again to the heap of potatoes. By the time the thaw arrived, we had gone more than four feet into the heap. This was a task the young were good at: creeping on their belly under the frozen pyramid. There was no danger of the pyramid collapsing until the thaw came in the month of April.

The cattle were all thrown clear but were then at the mercy of the snowstorm
A lorry load of cattle coming from the noted Monaghan fair got stuck in the ditch just past Brady’s public house. There were nine choice bullocks aboard. The cattle were all thrown clear but were then at the mercy of the snowstorm. The driver could do nothing. He didn’t own them and he could not get in touch with the man who had hired him to deliver them. But all was not lost: the local people surrounded the cattle and soon everyone volunteered to take one bullock, as they could not release them to the violent storm.
The lorry was in the hedgerow for weeks until finally the Brewsters garage men from Carrigallen were sent for. They worked for days trying to jack up the lorry. It was an old-time jack and every time it reached maximum extension, the end of it went down in the soft snow under the frost. The men put more stones under the jack and started all over again. Finally the Brewsters succeeded and with plenty of manpower they returned the lorry to the road. The cattle stayed with their adopted owners until the road was usable again, then the owner came and collected them, more than grateful to the people who took care of them.

Take a bow
There was no word of compensation and none was expected, such was the bond that these rural people had with cattle and other animals.
Later on in my life, in the 1960s, the buzzword with builders and developers was ‘insulation’. I often laugh to myself when I think about the great people who went before us. They didn’t know the meaning of the word and they definitely would not have been able to spell it. But they knew how to protect their potatoes and crops from the frost and the other elements.
Take a bow, you wonderful people.