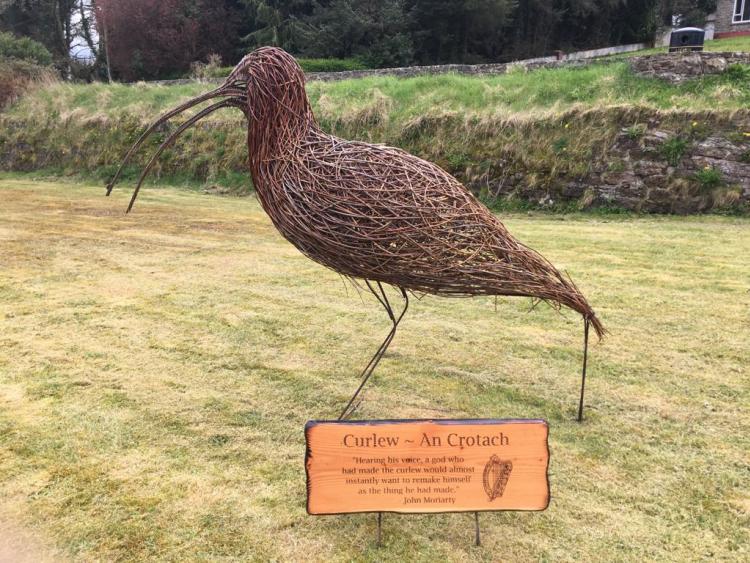 A beautiful willow Curlew sculpture, commissioned by the NPWS, from West of Ireland willow sculptor Brendan Farren has been erected on the outskirts of Drumshanbo

World Curlew day (Wednesday, April 21) is an international initiative involving local communities, environmental organisations and Governments, to raise awareness of the plight of curlews and to encourage activities to help them.

Eight species of Curlew have been known worldwide, two of which are assumed extinct or functionally extinct (the Eskimo and the Slender-Billed). Out of the remaining six species, three - the Eurasian, the Bristle-thighed and the Far Eastern - are at risk of extinction according to the IUCN Red list of Threatened Species. It is no exaggeration to say that many parts of the earth will lose curlews over the next few decades.

The Curlew we see in Ireland is the Eurasian Curlew, which has suffered widespread declines across its European range, but nowhere as severe as in Ireland.

Close your eyes, open your ears, and imagine the scene a dampened misty morning, a quiet country place, bright green grass glinting with dew and a dark figure rising up from its long bluish grey legs. A figure on wings rises from the verdant carpet with a brownish straight body and an absurdly long bill. Curloooo! Whaup whaup! Curlooooo-aloo-aloo-aloo!

There is only one bird this could possibly be: The Curlew.

Curlews are iconic birds of wild, wet, places – estuaries, mountain slopes, bogs and moorland, meadowland, and coast. They have inspired place names, poets, artists, musicians, and writers for generations. They have given us so much, yet we are allowing them to slip away as we change their habitats (afforestation, intensification of farming, drainage of bogs and fragmentation), with associated issues including food shortage and excessive predation. Conservation work including through the Curlew Conservation Programme, is underway to try and bring Ireland's breeding Curlew back from the brink and ensure the unmistakable and evocative call of the Curlew - Curloooo! Whaup whaup! Curlooooo-aloo-aloo-aloo! does not become a distant memory.

The returning Curlews and their iconic call hail the arrival of spring, longer days and warmer weather. The breeding birds arrive in flocks from early March onwards normally congregating around inland lake shores before splitting off into pairs looking for open damp areas like bog, damp grassland, farmland and heath or if they are an established pair returning to their historic nest sites. Curlew are largely site faithful, returning to the same field or area of bog annually and believed to be largely philopatric, which means they return to breed in the area in which they were hatched themselves. By mid-April the birds should have set themselves up in their territories and be looking for the perfect place to build a very simple nest on the ground, scraping a slight hollow and lining it with grass, moss, or fragments of rush. The arrival of warmer evenings and more insect life in May marks the female Curlew's egg-laying journey, most commonly they will lay between 3 or 4 mottled brown and dark green eggs. The eggs are large, and it can take over a week for the female to finish laying her clutch for the next 4 weeks. Both male and female Curlew take turns incubating the eggs. Curlew are ground-nesting birds, making them quite vulnerable to predation.

Curlew are Europe's largest wader- they have a wingspan of almost one meter and stand around knee height at 50-60cm's. Their most distinctive and distinguishing feature is their long, downward-curved bill at 15cm from base to tip, beautifully curved in the shape of a crescent moon (which gives them their scientific name).

To celebrate this iconic Irish bird, its beauty and fragile place in our countryside, a beautiful willow Curlew sculpture, commissioned by the National Parks and Wildlife Service at the Department of Housing, Local Government and Heritage, from West of Ireland willow sculptor Brendan Farren has been erected on the outskirts of Drumshanbo. It is located on the west side of the town, along the R208 as you leave town. It is one of just seven such Curlew structures placed in the most important parts of Ireland for our last remaining Curlew. It is hoped that as we go about our daily business, these structures will bring to mind a friend, a source of inspiration and a beautiful part of nature, that has shared this island with us for thousands of years, but which we might no longer see or hear, if we do not consider how we have come to this point in 2021.