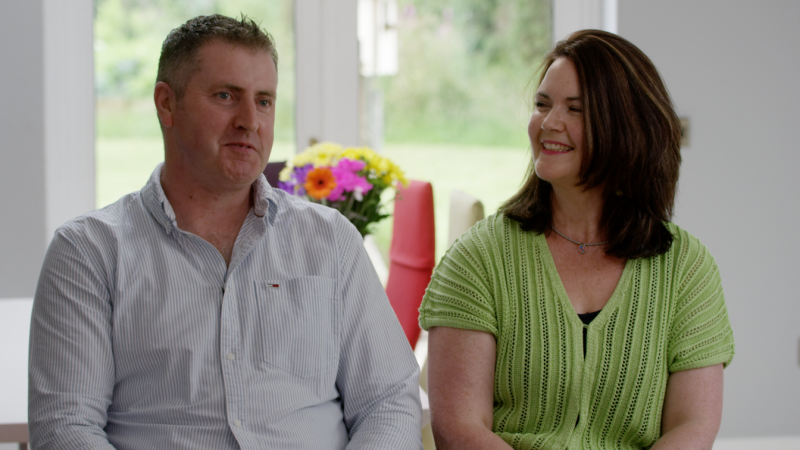 Sinead and Paschal Gillard, Jinny's Bakery and Tearooms, were interviewed as part of the series

In a motivational and inspiring six-part series produced by Dundara Television & Media, viewers will discover a genuine message, that life, and in particular your career won't take a step back by moving to the west of Ireland.

Each half hour episode explores the many opportunities that this region has to offer across multiple sectors and we find out that the west is populated with major national and global companies, with a thriving start up ecosystem whilst yet retaining its natural charm and beauty.

Leitrim is the focus of one episode where two families are interviewed Derry Lynch who moved back to Carrick-on-Shannon from Dublin and is the Head of Customer Success at Cora Systems and Sinead and Paschal Gillard who, having lived in Waterford, Aberdeen and Dublin opened Jinny’s Bakery and Tearooms in Drumshanbo. The bakery has numerous awards and now supplies Spar, Centra, Tesco Londis and SuperValu.

Tying in with the Western Development Commissions "More To Life" campaign, this new series for TG4, presented by renowned broadcaster Mary Kennedy, will show the public the possibilities if they decide the West of Ireland is the right place for their next move. Shot against the back drop of the unique natural beauty and culture of the West of Ireland, over the course of six half hour episodes we follow the lives of six families who have moved or are in the process of moving to the West of Ireland.

According to the producer and director of “Moving West” Enda Grace, the series is very timely. “The Covid-19 pandemic gave people the opportunity to re-assess their lives in many ways. Remote working and the hybrid model of work have suddenly become very real options. Covid-19 has propelled the concept of working from home which makes such a move no longer a dream for many people. In the past, people thought moving West wasn’t a viable option due to deficiencies in broadband, infrastructure or lack of career opportunities. We found when filming the show that these barriers are no longer in place, with many choosing to work from a hub, start their own business and ample job opportunities across all sectors from FDI to indigenous.”

The series explores the families, couples and individuals’ motivation to move while shining a light on all the West of Ireland has to offer in terms of lifestyle, outdoor amenities, food culture and quality of life. The show follows the families on their relocation journeys and in each episode the viewer gets to take a peek behind the curtains of the county, the local communities and those driving the region into the future.

WDC CEO Tomás Ó Síocháin commented; “The West of Ireland is seizing the opportunity to renew itself by attracting thousands of young professionals and families to make new lives in the region. This new series reflects the findings of our National Remote Work Survey recently conducted with NUIG highlighting that people are now choosing to find More To Life in the West of Ireland. The transition to remote work has allowed people to choose where to live and throughout the series we meet those now working from home, from a hub or finding a new role with one of the many employers across the region. Our new platform Westernjobs.ie highlights some of these roles and ConnectedHubs.ie, the National Hubs Network, offers employees the opportunity to find a suitable base for their remote work outside the home. For employers Connectedhubs.ie offers a connected, sociable work environment and for communities, it’s a driver of economic and social change. The series highlights the vibrant towns and villages that can and should benefit from our diaspora returning home and those finding a new life across the region.”

Mary Kennedy is one of Irelands most renowned and much loved television presenters. Mary's love of the West of Ireland is also compelling and she spends quite a bit of time with her sister Deirdre who lives on Inis Meain. “I think the series is very timely and I think it fits in very nicely with a different way of thinking about living and working which developed during the pandemic” according to Mary. “I’m a Dub, but I just love rural Ireland. The series is in a bilingual format in Irish and English and I just relish having the opportunity to use my Irish, a language I love. I really enjoyed filming with Enda and the team and meeting such inspirational people who had made the move west. It’s a very genuine and lovely series.”

Head of Communications at the Western Development Commission Allan Mulrooney commented "The show was a great opportunity to bring to life the stories we know make the West of Ireland what it is today. Over six episodes we hero the vibrant start-up ecosystem, some of the multinationals creating thousands of jobs and the people driving the region forward. We'd like to thank all of those who contributed and welcomed us into their homes and businesses over the last few months to make the show a reality."

Moving West begins on TG4 on Thursday 23rd September at 9pm and is repeated every Monday at 7.30pm. The episode focusing on Leitrim will be screened on 28th October