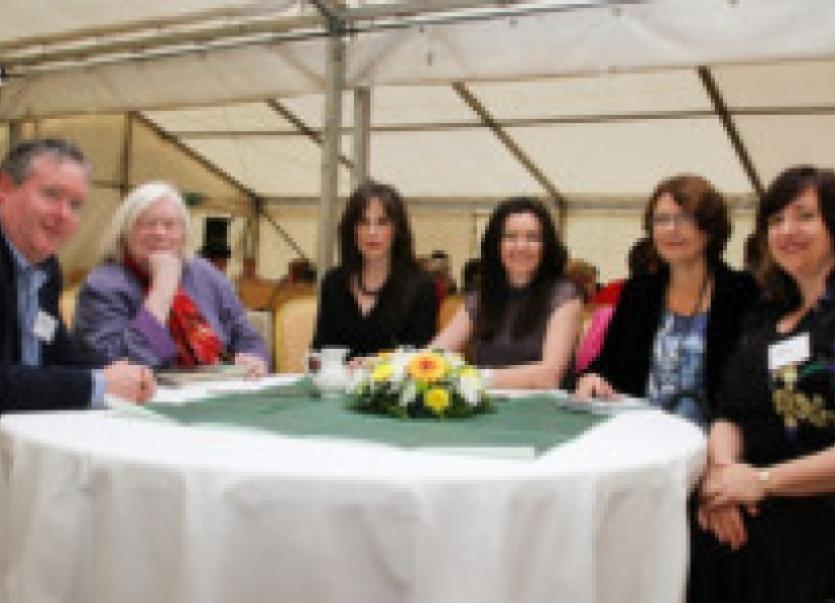 Marking the completion of ‘Dialogues through Literature,’ an eighteen month project celebrating a shared interest in Literature and Language.

Marking the completion of ‘Dialogues through Literature,’ an eighteen month project celebrating a shared interest in Literature and Language.

On Friday June 28, a major cross-community literary event – the Dialogues through Literature Readers’ Symposium 2013 – opened in Ballinamore, bringing together the wider reading public and book group members from different cultural backgrounds. Organised by Ballinamore Sean O’Heslin’s GAA club, the event was an enormous success with over 250 people across the two days attending from across Leitrim, Cavan, Fermanagh and Tyrone to celebrate a shared interest in literature and language.

The Dialogues through Literature project used books and reading to enhance the levels of interaction, communication and reconciliation among communities from both traditions by developing contacts between existing reading groups in the targeted counties with the ultimate goal of challenging stereotypes, developing greater mutual understanding and building sustainable cross-community relationships.

The symposium opened with ‘Fact and Fiction,’ exploring the relationship between the past and present within the imaginations of the writer as well as reflecting lived realities. The afternoon focus switched to exploring women’s literary voice, reflecting that local centenary anniversaries being marked this decade also include issues around women’s suffrage. The programme continued on Saturday, focusing on a celebration of language, writing and authors with connections to place. It featured a line-up of award-winning authors and critics, including recently published Rebecca O Connor, film critic and commentator Ted Sheehy and established author Martina Devlin who looked at the significance of ‘place’ in their work. Parallel sessions exploring the decline of the Irish language took place as well as a reading and talk by author Eilis Ni Dhuibhe.

DBC Pierre, spoke eloquently and with refreshing honesty about winning the Man Booker prize for his debut novel Vernon God Little, drawing parallels between the lived experiences of the writer and the creative writing process itself. Saturday was brought to a close with a reading and talk by the Leitrim-based writer Michael Harding, he read from his latest work Starring at Lakes - A Memoir.

Paddy Connaughton, Secretary of Ballinamore Seán O’Heslins, noted that community engagement and outreach is an important part of the club’s heritage and broad cultural agenda which goes beyond sporting activity and seeks to play a wider role in the community as a cultural organisation in line with the significant contribution made by the GAA in supporting the peace process.