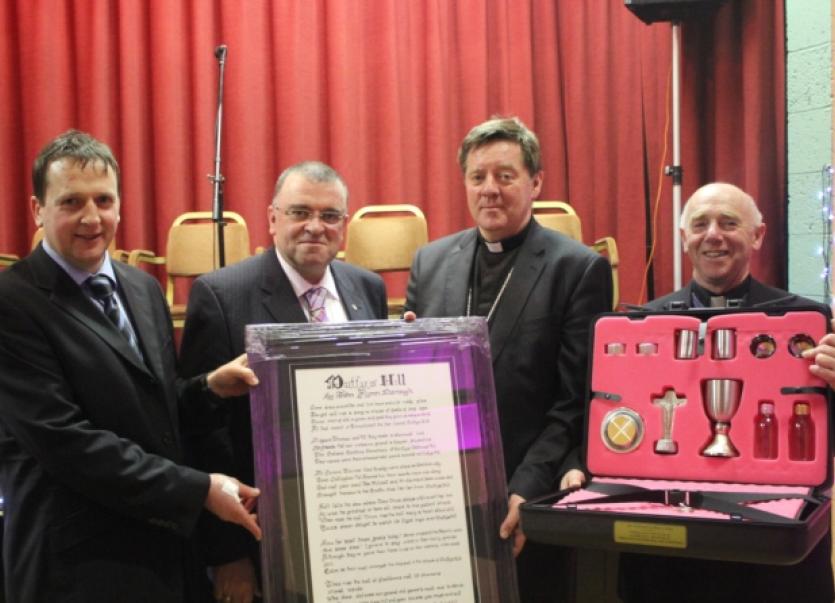 Bishop Francis Duffy returned home to his native parish of Templeport in the Diocese of Kilmore recently for celebrations to mark his ordination as Bishop of Ardagh and Clonmacnois.

Bishop Francis Duffy returned home to his native parish of Templeport in the Diocese of Kilmore recently for celebrations to mark his ordination as Bishop of Ardagh and Clonmacnois.

The event was organised jointly by the Parish Pastoral Council and Parish Finance Committee in Templeport.

The celebrations began with Mass in St. Mogue’s Church, Bawnboy, at 8pm. It was in this church that Bishop Francis was ordained to the priesthood in 1982.

Representatives from both church areas in the parish participated in the Mass and the choir comprised of members of the choirs of St. Mogue’s Church, Bawnboy, and St. Patrick’s Church, Kilnavart.

Bishop Francis, his family, the clergy and religious present, and the large congregation were welcomed at the beginning of Mass by Pat Geoghegan, Chair of the Parish Pastoral Council.

The Master of Ceremonies was Seán Coll.

After Mass, there was a social evening in Templeport Resource Centre during which Fr. Phair presented the new bishop with a Mass Kit on behalf of the people of his native Templeport.

Bishop Duffy was also presented with a framed version of a well-known local poem, “Duffy’s Hill”, done in calligraphy by local artist, Seanie Cassidy, which is about his home townland of Port.

Parishioners and guests had the opportunity to speak to Bishop Francis Duffy during the course of the evening and to wish him well in his new role.

Bishop Duffy thanked the people of Templeport for their kindness and generosity to him as well as their support and encouragement down through the years.

He attended Munlough NS, St. Patrick’s College, Cavan; then, he entered the Seminary at Maynooth, where he took the requisite undergraduate Philosophy and graduate Theology seminary coursework.

He earned two Master’s Degrees: in History and in Education and Management. He was ordained to the priesthood on 20 June 1982. After his presbyteral ordination, he was Professor of History and of the Irish language at St. Patrick’s College, Cavan, and then taught at the St. Felim’s College, Ballinamore, becoming the Dean there. He was the Secretary and the Chancellor of the Diocese of Kilmore.

Up until his episcopal appointment, he was completing his Doctorate in Education.