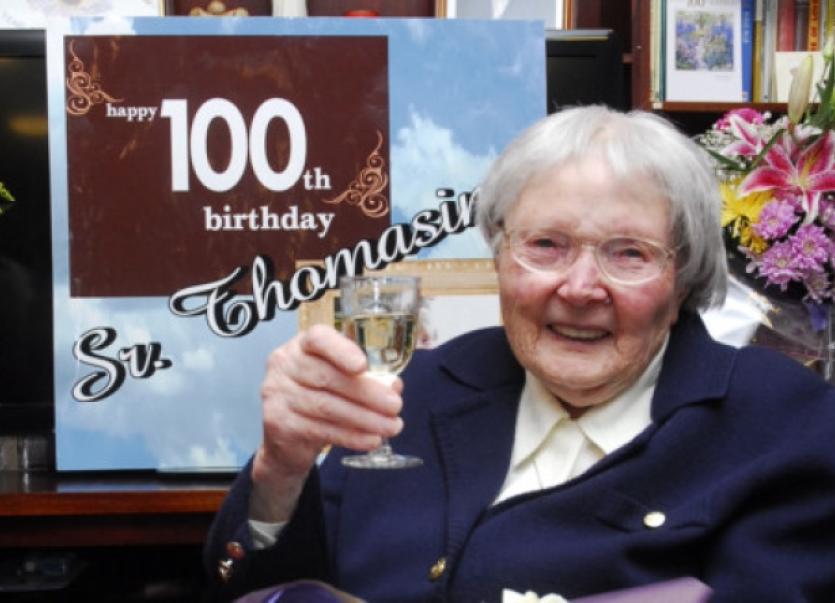 The past century has brought the greatest change in terms of politics, religion and lifestyle this country has ever known.

The past century has brought the greatest change in terms of politics, religion and lifestyle this country has ever known.

100 years ago Sr Thomasina Gilfillan was born the fourth in a family of nine in a small cottage in Aughavas.

During her lifetime there has been two World Wars, a Rising, Revolution, Civil War, overturn of Government in Ireland, changes in laws, advancement in medicine, technology and communication and an overhaul of daily lifestyle.

Born on February 4, 1914 in Aughavas, her family moved to Kilmore in Co Rosocmmon when she was just 3 months old. She told the paper despite her brief time in Leitrim she still “supports Leitrim, especially when they are playing Roscommon!”

Sr Thomasina’s 100th birthday was celebrated with her family on Sunday, February 2 and on her birthday Tuesday, February 4 with the Marist Sisters, neighbours and friends.

Sr Ann O’Mahony, Community Leader, presented Sr Thomasina with ten roses, one for every decade of her life on behalf of the Marist community.

A large number of family, friends and neighbours visited the home of Sr Thomasina for the popping of the Moet champagne, singing ‘happy birthday,’ enjoying cake and to chat with this extraordinary, witty woman.

Speaking to the Leitrim Observer on her birthday, she said she left home in 1935 to become a nun and returned home in 1937 to her first teaching post in Tubbercurry, Co Sligo.

She said “I always wanted to be a nun,” but she did admit “it was hard to leave home.” Her father died when she was just 17 years old.

She revealed that out of the nine children in her family, three of the boys were ordained as priests and four of the girls became nuns.

The nun fondly remembers her days in Sterling and said she was delighted to receive a birthday card from Sterling signed by many of the community last week.

When asked what her best memories are, she said “my time at home.” She said, “It was a happy home, with the nine of us, we had a great childhood.”

She explained when she joined the Marist Sisters, the habit was a strict uniform. She was delighted when it was relaxed and she could choose her own clothes. She also said the vow of poverty which still exists was so strict. “If you found a halfpenny you would have to give it to your superiors,” she recalls. The rule of silence meant that in her order the nuns could only talk at recreational time.

She remembers how times were tough during the rations of World War II, “All we had was the radio”. They had no car, no TV and “we were only let out once a year.”

Sr Thomasina has two sisters alive who are Mercy nuns. She said she enjoyed her time in the nuns and liked “helping the people around me.”

When she was younger she loved to dance, had a keen interest in GAA, soccer and golf. She was fond of watching TV especially musicals and detective series.

She revealed that the secret to a long and health life is a “bright outlook.”