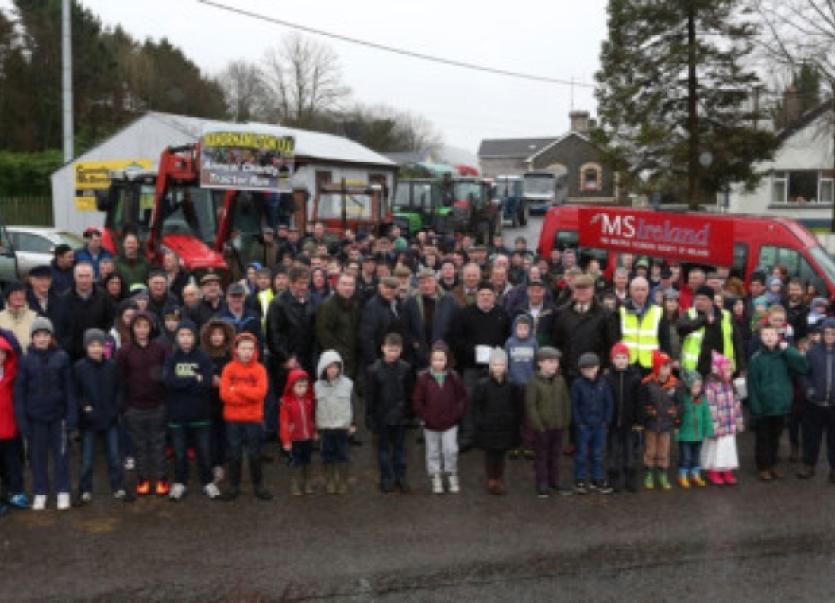 There was a great turnout of 60 tractors for Manorhamilton IFA’s fourth annual Tractorcade, which took place in Manorhamilton and its surrounds on New Year’s Day, Thursday January 1.

There was a great turnout of 60 tractors for Manorhamilton IFA’s fourth annual Tractorcade, which took place in Manorhamilton and its surrounds on New Year’s Day, Thursday January 1.

The massive Tractorcade started at the Mart at 1.30pm and the vehicles involved first went through the town and then proceeded on its normal route down the N16 Enniskillen road as far as Kilmakerrill.

The return to Manorhamilton was via Lissinagroagh and the Blackpark junction.

Manorhamilton Livestock Sales, Killasnett Co-Op and Heraghty’s Bar are among the local businesses that provided invaluable support to the Tractorcade for many years.

Meanwhile the help in promoting the Tractorcade by those volunteers who acted as marshals and collectors on the day was very important. Most of all the success of the Tractorcade is thanks to the farmers who take part and the wider community who came out to donate to the fundraising effort.

The Tractorcade organisers were very happy with their highly successful event on New Year’s Day. Manorhamilton IFA would also like to state that all support for the Tractorcade was greatly appreciated.

This year the money raised from the Tractorcade will be donated to the MS North West Therapy Centre and the Leitrim Branch of MS-Ireland. The MS Therapy Centre – which is located beside St. John’s Hospital in Sligo – was founded in 1993 by a group of individuals with Multiple Sclerosis (MS).

The Centre depends on the generosity of donors to provide these services – services which can do so much for the quality of life of those living with MS. People in the general North Leitrim area affected by MS can avail of a special bus service provided by the Leitrim Branch of MS-Ireland to bring them to the MS Therapy Centre.