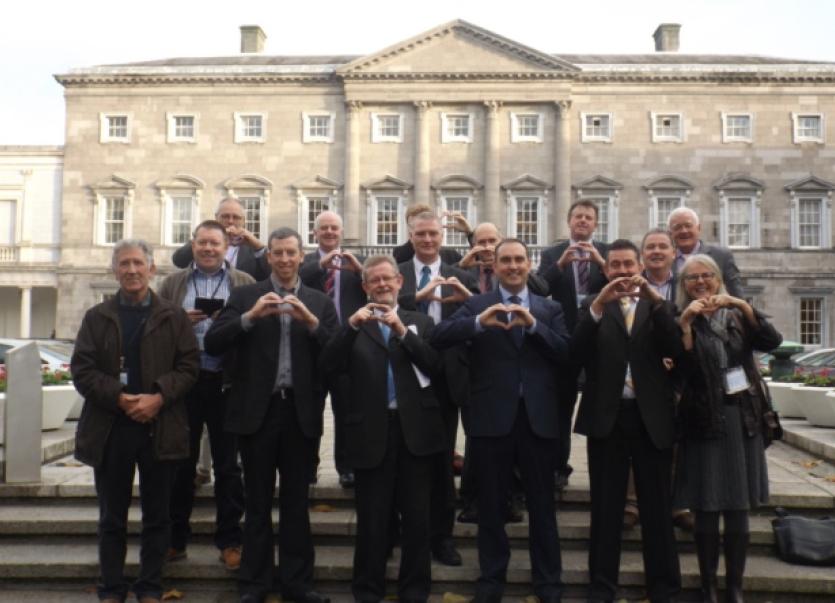 A meeting to discuss the unconventional gas exploration and extraction proposing the use of Hydraulic Fracturing in the Lough Allen Basin was held in The Dáil on Wednesday, November 12.

A meeting to discuss the unconventional gas exploration and extraction proposing the use of Hydraulic Fracturing in the Lough Allen Basin was held in The Dáil on Wednesday, November 12.

Councillors across the parties in Leitrim and Sligo travelled to the Capital, including four members from Sinn Féin, two from Fine Gael and one from Fianna Fáil who had worked in conjunction with anti fracking groups Love Leitrim and Belcoo Frack Free from Fermanagh to set the event up. The meeting was chaired by Sinn Féin Deputy Michael Colreavy.

Parties represented by TDs, Senators and Councillors voiced their support of the antifracking movement.

Michael Moynihan, spokesman for Communications, Energy and Natural Resources, took the opportunity to make Fianna Fáil’s position clear stating that they were unequivocally against Fracking. He said “We need to close this down because this is not the way forward”.

Eddie Mitchell of Love Leitrim told the meeting that in Northern Ireland, despite been given three and half years including one six month extension, Tamboran Resources failed to complete their agreed work programme.

He explained that Arlene Foster, Northern Ireland Minister for Enterprise Trade and investment denied them another licence extension which, he said “showed that she had no confidence in their ability to complete a work programme”. He said it was time that the Irish Government threw out Tamboran’s application for an exploration licence adding: “It is time for Tamboran to go”.

Mr Mitchell pointed out that fracking was attempting to come into Ireland via “the back door’ using Northern Ireland.

After the Irish government rejects Tamboran’s application, he proposed that the Republic needs to hold a proper debate into its energy policy that will ultimately lead to a ban on Fracking.

He told the meeting: “We will resist it and our councils will support us”

Tom White, Chair of Belcoo Frack Free Fermanagh who made a presentation at the meeting, reiterated the call to ban fracking.

“If Denton in Texas which was the birth place of Fracking country in America can ban Fracking last week, it’s time that we do too,” he told those assembled for the cross party meeting.