Stories of the Showgrounds book launched 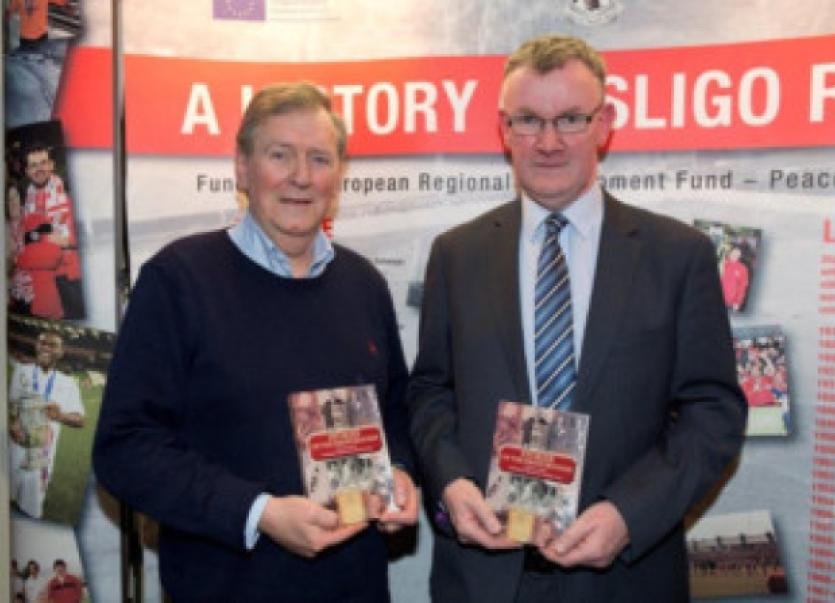 There was a large crowd in the Showgrounds on Friday last for the launch of ‘Stories of the Showgrounds’, written by Kevin Colreavy and published by Sligo Rovers Heritage Group.

There was a large crowd in the Showgrounds on Friday last for the launch of ‘Stories of the Showgrounds’, written by Kevin Colreavy and published by Sligo Rovers Heritage Group.

The launch was attended local Councillors, TD’s and Senators, along with family members of people featured in the book. The launch was MC’d by Tommie Gorman, who recalled many of the famous characters who have served the club in various capacities.

The Cathaoirleach of Sligo County Council, Councillor Joe Queenan, talked about the relationship between Gaelic football and soccer in Sligo over the year.

While Sligo was only one of two counties to vote against the over-turning of the ‘Ban’ in 1971, the Sligo County Board was to the fore in formally proposing the opening of Croke Park for other sports.

Mayor Councillor Tom MacSharry spoke of the special association linking City Hall and Sligo Rovers. He highlighted the fact that Mayor Michael Keane was instrumental in founding the Showgrounds in the early 1900’s, and that two of his grand-children, Michael and Mark Keane, were in attendance at the launch.

Vice-Chairman of Sligo Rovers Robbie Fitzpatrick said the book would be a valuable reference documenting the special contribution of club players, managers, volunteers and supporters over the years, and predicted it would be read by many people in the wider community.

Kevin Colreavy said the book was a snapshot of the many, many legends and characters who are held in special regard by the club. He summarised the landmark events in the history of the ground, from its founding as a location for the Agricultural Show, to a hugely popular venue for soccer, Gaelic, rugby, and many other sports and events.

Kevin recalled the first soccer and gaelic games in the Showgrounds, paid tribute to some the loyal female supporters of another era, and highlighed the special contribution of a few dedicated people for who the Showgrounds became a second home.

Chairman of Sligo Rovers Heritage Group Aidan Mannion reflected on the work of the group since it was founded two years ago, including the hosting of exhibitions in Sligo Museum and the Northside Community Centre. He gave brief outline of further publications planned by the group.

The publication of the book was funded by the PEACE 111 Programme through the European Union’s European Regional Development Fund managed for the Special EU Programmes Body by Sligo County Council on behalf of Sligo Peace and Reconciliation Partnership Committee.