Family express thanks for support for ‘miracle child’ 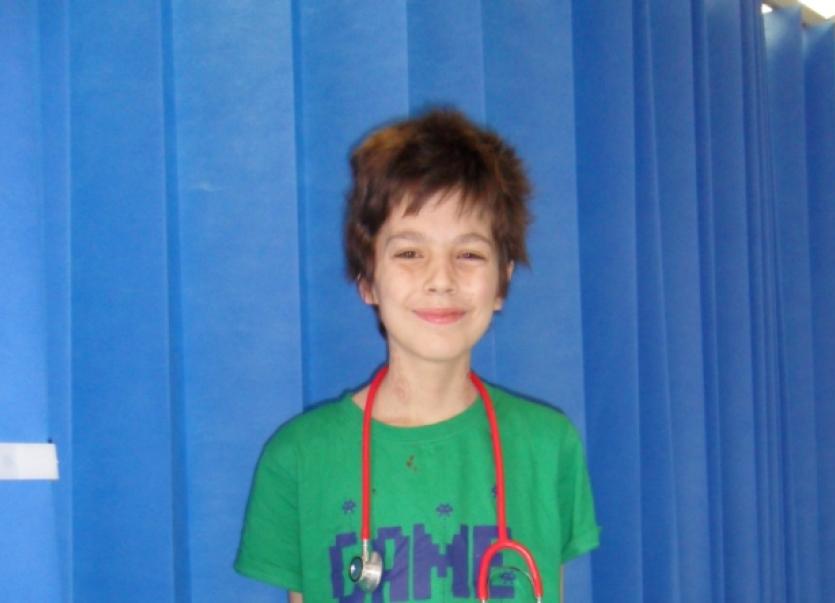 The family of a Dromahair boy who has been described as a “miracle child” have expressed their thanks to the community of Dromahair for their prayers and thoughts for their son Luke Martindale who was rushed to King’s College Hospital in January after becoming critically ill.

The family of a Dromahair boy who has been described as a “miracle child” have expressed their thanks to the community of Dromahair for their prayers and thoughts for their son Luke Martindale who was rushed to King’s College Hospital in January after becoming critically ill.

Luke (11) became sick and was brought to Sligo Regional Hospital on the recommendation of the local GP on January 19. While in Sligo his condition deteriorated and the liver unit came from Crumlin to Sligo and brought him to Dublin.

Luke’s father Michael explained, “They tried to stabilise him until he was ready to go to London.

“He got permission to travel by Government jet on January 20 and they agreed to let his mother, Norma, travel while I stayed and got an emergency passport for Luke which they did within a few hours and I got the next flight to London.”

It was discovered Luke suffered from Wilson’s disease, which is very rare and usually fatal if not discovered in time.

According to the British Liver Trust, “Wilson’s disease is a disorder in which you have a higher than normal amount of copper in your body. An overload of copper is poisonous (toxic) and can damage your liver, brain and other organs.

“The overload is caused by a genetic defect that prevents your liver from being able to metabolise and remove unnecessary amounts of copper from the body as it normally does.

“If Wilson’s disease is diagnosed early enough it can be effectively treated. When it is not treated, the disease is always fatal.”

Recalling just how serious Luke’s condition was Michael explained, “When I got there I found out they had revived him twice.”

A liver did become available incredibly quickly, on January 22, but Luke was deemed too unstable for the transplant to go ahead.

Praising the staff in King’s Hospital, London Michael recalled, “They came up with the idea of the extracorporeal membrane oxygenation (ECMO) machine,” which supports the heart and lungs when a patient’s own organs start to fail.

“They said it had never previously been done before an operation.”

Commenting on the decision to use the ECMO machine Michael said, “It was an experiment but it was a chance to save our son’s life.”

Detailing just how critical Luke was, Michael recalled, “They said if he gets onto the adult ward to get the ECMO machine put on him he has a 2% chance. They said once he had the transplant he had a 30% chance of survival.

“As a parent you cling on to every chance. They keep telling you everything that can go wrong to prepare you for the worst.”

Recalling the moment when Luke was brought to the ward and hooked up to the ECMO machine Michael said, “There was a sigh of relief from everybody.”

The procedure with the ECMO machine took almost an hour and a half and involved taking blood out of Luke’s body in order to eliminate the presence of carbon monoxide and filling the blood with red blood cells.

As well as experiencing difficulties with his kidneys and liver, Luke also suffered a collapsed lung.

“I have never seen such organisation,” Michael recalled. They had liver, kidney and lung teams as well as nurses and the technicians for the ECMO machine with him.

“He had swelled up so bad it was hard to recognise him but the staff were phenomenal there as they were in Sligo and Crumlin.”

Luke underwent his operation just two hours after initially being put on the ECMO machine and he was also on the machine for 11 days after the operation.

Incredibly, just six weeks and four days after he was rushed to King’s Hospital, Luke was back in Ireland where he continued his rehabilitation in Crumlin for a couple of days.

Trying to explain just how extraordinary his son’s recovery has been Michael said, “He was referred to as the miracle child by one of the doctors. He came back against all the odds.”

Shortly after Easter Luke made a return to Drumlease NS for a couple of hours a day and was able to sit his end of year tests, which he passed, Michael recalled with a proud smile.

Drumlease NS were among a number of people and organisations the Martindale family are keen to thank for their support during Luke’s illness.

“We would like to say a huge thank you to the local community. It was good to get their support and help. The amount of support from Dromahair and the surrounding areas was incredible. There were prayers said in Australia, Africa and America,” said Michael adding, “We appreciate everything the people of Dromahair did for us.”

Another organisation that was of invaluable support was Ronald McDonald House in London. “We would have been sleeping in the corridors of the hospital without their support,” was how Michael described the service they offered.

“Loads of people die on waiting lists. This offers a bridge and a chance to buy time for surgeons and we’re all for that.”