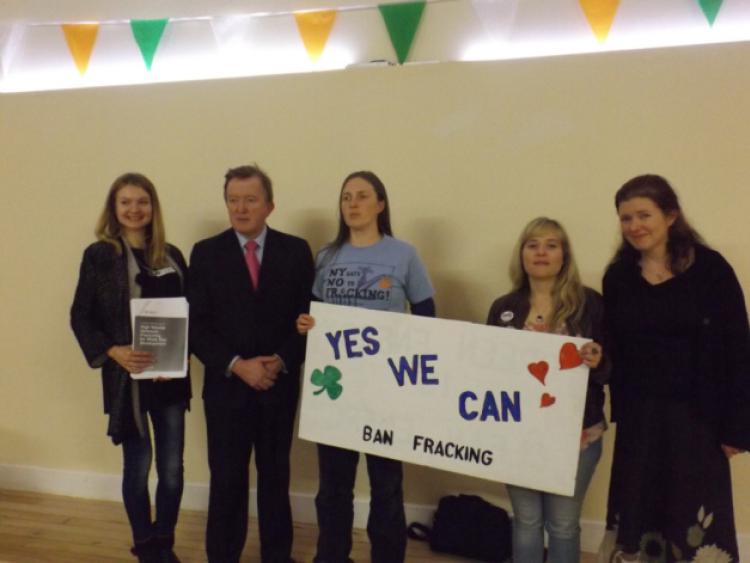 Julia Walsh, Founder and Campaign Director with FrackAction in New York said to a packed hall of over 200 people in Leitrim that they would offer support to ensure “that not one fracking well would be drilled in Ireland”.

Julia Walsh, Founder and Campaign Director with FrackAction in New York said to a packed hall of over 200 people in Leitrim that they would offer support to ensure “that not one fracking well would be drilled in Ireland”.

She was speaking with two colleagues John Armstrong and Renee Vogelsang on Friday, April 3 in the Ballroom of Romance in Glenfarne at a community meeting jointly organised by Good Energies Alliance Ireland, Love Leitrim and Northwest Network against Fracking.

FrackAction demanded that there be a ban on fracking, and that not one well would come into New York. They were successful in meeting their aim as fracking was banned in New York last December.

Julia said, “We are here tonight in solidarity and to provide any assistance we can so that not one well is drilled in Ireland.”

After over 400 peer reviewed reports they found out that “fracking cannot be done safely because it poses a serious risk to New Yorkers and if its not safe in New York its not safe in any part of Ireland.”

John Armstrong, Communications Director of FrackAction, catalogued the risks associated with fracking, from well failure, to air pollution, to earthquakes.

As well as the problems caused, there was a common connection. Each state claimed they would learn from the last one on and that gold standard regulation would stop problems, but each time the same thing happened again.

He said there was a move from anecdotal evidence to empirical evidence over the last couple of years. 96% of studies looking at public health showed adverse outcomes, 92% of studies on air pollution showed elevated air contamination, three quarters showed high risk of water contamination.

“The bottom line is that those regulations and those promises won’t make fracking safe. There are inherent problems that you just can’t fix.”

He spoke of citizenship and the effective “megaphone of the people and the political mandate that we can all create by coming to meetings like this.”

Michael Colreavy TD reaffirmed his support to the anti-fracking movement both inside and outside the Dáil.

John Perry TD invited the NY delegation to come to the Dáil.