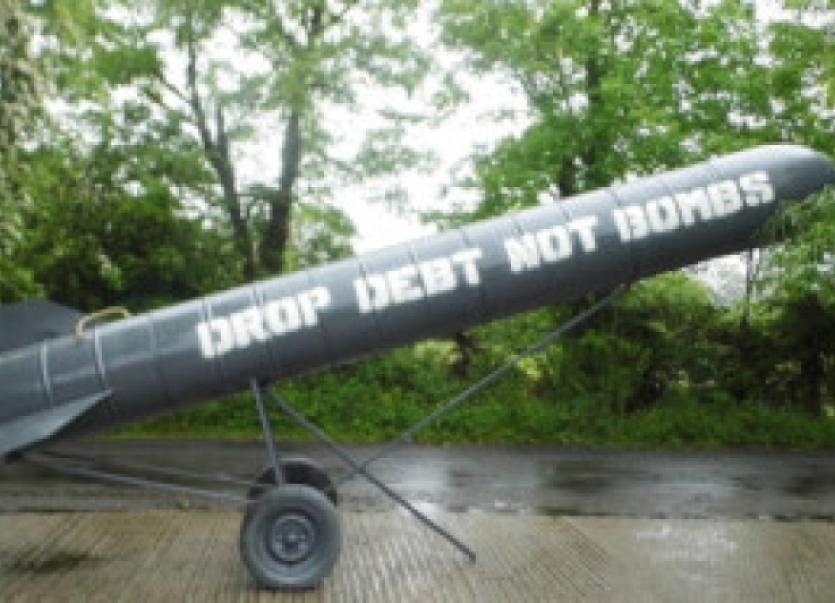 Campaigners from Leitrim joined around 800 people in a ‘G8 Not Welcome’ march around Enniskillen on Monday, June 17.

Campaigners from Leitrim joined around 800 people in a ‘G8 Not Welcome’ march around Enniskillen on Monday, June 17.

The peaceful demonstration was made up of anti-frackers, people against property tax, austerity, tax evasion, war and world hunger. During speeches by politicians and campaigners approx 60 people broke through the security line of razor wire and crossed into a nearby field where up to 100 riot police were waiting. The crowd were dispersed shortly and the PSNI said there were no arrests.

Before the protests, an imitation rocket with the slogan ‘Drop Debt Not Bombs’ was seized from a private house at Killavoggy, outside of Dromahair on Sunday morning, June 16. Following the seizure, local and national politicians including Cllr Declan Bree, Joan Collins TD, Joe Higgins TD, Clare Daly TD and Richard Boyd Barrett TD contacted the Gardai and the Department of Justice to complain about the confiscation and to seek its return. Sunday night, the rocket was returned by Gardai to the owners, the rocket was used in the peaceful G8 Protest Demonstration.

Cllr Bree said “The seizure and confiscation of the imitation rocket was clearly unacceptable and could only be described as an intimidatory act. The people of this country, North and South of the border, must be allowed the right to peacefully demonstrate and to participate in legitimate protest parades without police interference and without interference from British and American security agencies.”

According to Patricia Gilheany of Concerned Irish Citizens a number of posters showing support of the Quinn family were either removed or slashed on Sunday night before the G4 Summit. On Monday Mrs Gilheany told the paper, “a number of large posters supporting the Quinn family and expressing the concerns about the situation were vandalized and slashed in the dead of night last night. Clearly, the truth hurts and it is ironic that they were removed the night before the G8 summit.”

The staged tractor run from Manorhamilton to the iconic Ballroom of Romance, Glenfarne to shine a light on their opposition to fracking on the national and world stage on Saturday, June 15 saw a large local crowd of farmers join together with over 70 tractors and farm vehicles from North and South. Pat Gilhooley Chair of Leitrim IFA said the they had concerns about fracking and were doing research into the procedure. Farmer Paul Ferguson said he believes that fracking would ruin farming if let in either side of the border.