Making a real difference in the lives of so many 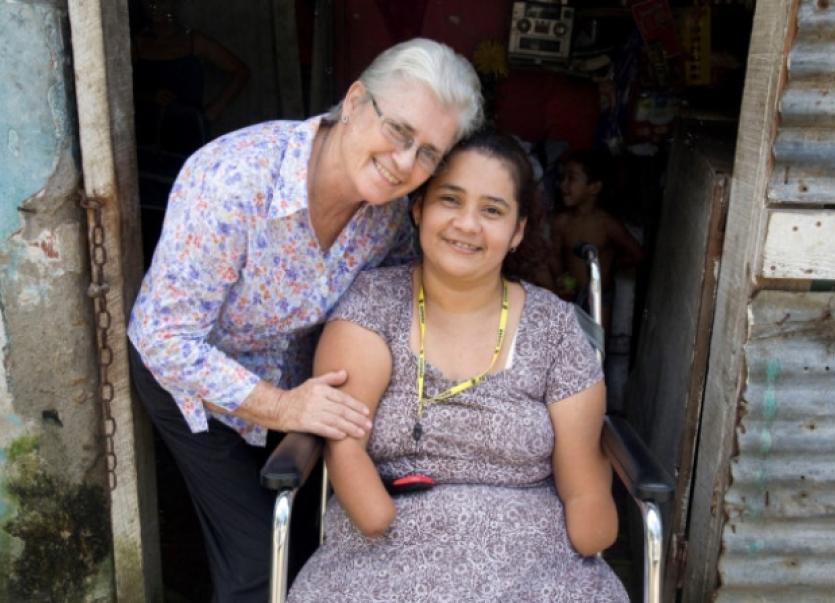 A coffee morning in support of Sr Renee Duignan and the work of the Medical Missionaries of Mary in Choloma, Honduras, will be held in Kiltoghert Community Centre on Sunday, June 29 next.

A coffee morning in support of Sr Renee Duignan and the work of the Medical Missionaries of Mary in Choloma, Honduras, will be held in Kiltoghert Community Centre on Sunday, June 29 next.

There will be coffee, tea and plenty of treats to enjoy between 11am and 1pm.

All are welcome to attend and monies raised will go towards the essential work that Sr Renee and her congregation are carrying out in South America.

For more details on Sr Renee’s work see the website http://mmmworldwide.org/index.php/our-work/countries/honduras
Please come along on June 29 and show your support. Even the smallest donation makes a huge difference to the poorest people of Honduras.

Serving the poorest of the poor in war torn and famine affected countries may not be a calling for most of us but one Kiltoghert woman has made it her mission in life to assist those in need, no matter where that spiritual journey takes her.

Sr Renee Duignan left her native Co Leitrim in August 1961, bound, like many of her generation, for a new life in America.

As a young woman she enjoyed the drama and excitement of New York but just three years after her arrival her personal journey took a new turn after she felt the call to serve God, joining the Medical Missionaries of Mary and beginning life in the Congregation Novitiate in Boston.

“I just felt that I had a calling to help others, the poorer and the less well off and I was drawn to the Medical Missionaries of Mary. I wanted to go on a mission to Africa or South America,” she told our reporter this week as she enjoyed a short visit home to see family and friends here in Ireland.

Sr Renee achieved her goal and her first missionary placement brought her to Malwawi, Central Africa one of the poorest countries in the world with over 10 million living in a space little bigger than Ireland.

“The poverty there was terrible and we (The Medical Missionaries of Mary) were the only health service available,” she explained.

“The sheer scale of the poverty was overwhelming. These people truly had nothing and the conditions they lived in were unimaginable.”

But with her small team of fellow missionaries, Sr Renee served the people of Malawi for 10 years, providing essential medical and midwifery services and helping to improve the lives of so many.

“We were, with the support of friends and the generosity of so many people including those here in Ireland, able to make a difference. We built a hospital and were able to develop medical services in an area which really had little in terms of health care,” said Sr Renee.

“The work was very hard and during the last few years there AIDS seemed to undo much of the hard work we had done of the previous years. That was the challenge, dealing with not just the poverty but with this terrible disease.”

After over a decade in Africa Sr Renee was called to serve at congregational leadership level for a further 12 years before serving in Mexico and finally moving on to Honduras.

She initially began her work with the Indigenous Lenca peoples in the west of Honduras, near the border with El Salvador. After five years she moved to Choloma in northern Honduras, where she has spent the past 10 years living and working amongst the people of the shanty towns.

“Choloma is a city and it has a lot of factories which have attracted a lot of people from the countryside into the area. Many end up living in shanty towns and this is the community which we serve,” said Sr Renee.

“Since the world economic crisis, many of the factories where these people worked closed down and there is just no where for these people to go. There is no proper housing or roads and no supports for the poor.

“We (the Medical Missionaries of Mary) live close to the community we serve and we see first hand the impact that the poverty has had on these people.”

As well as building a health centre for the community, Sr Renee and her missionary colleagues, one from Uganda and one from the Philippines, along with nine local staff members, have battled to bring hope and health care to the people of Choloma.

“We do some curative medicine alongside complimentary medicine and we visit people who are sick in their homes. We also have an AIDS programme for those impacted by this disease and we provide special programmes for children with behaviour alproblems and learning disabilities,” she explains.

One of the biggest projects is a domestic violence support programme.

“We provide help for the women and children who are victims of domestic violence through support groups,” she said.

The challenge for Sr Renee and her colleagues is to continue this work into the future and to this end, they rely largely on the support they receive from communities such as those here in Co Leitrim.

A coffee morning has been organised to raise money towards the work in Kiltoghert on June 29.