Celebrating 125 years of the Leitrim Observer 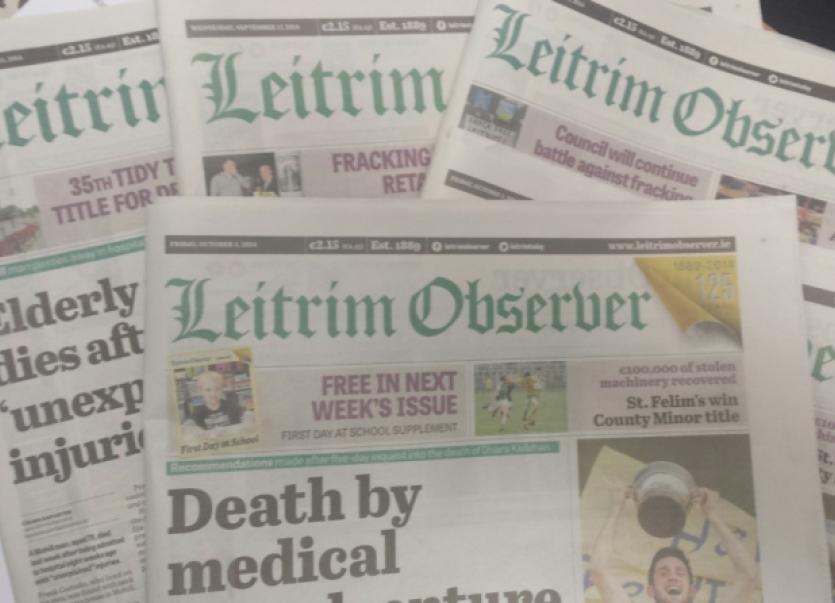 This year the Leitrim Observer celebrates its 125th anniversary next month.

This year the Leitrim Observer celebrates its 125th anniversary next month.

First published in 1889 by the Mulvey family from Ballinagleara the last century and a quarter has seen some massive changes within the paper and the media industry.

To mark the occasion we will be producing a special bumper supplement which will include a review of the papers published over that time along with articles from some key Leitrim people and those who have been influenced by their time with the Observer.

However this newspaper is a community one and therefore we are asking you, our readers, to come on board with us.

We would love to print some of your old pictures - no matter what the event, i.e. communions, school pics, sports, entertainment, functions... the list is endless.

We would also love to hear your memories of the Observer. Did your photo feature in it 50 years ago? Was there an article on a football match you played in?

Was your wedding featured? Perhaps a dinner dance which you attended?

These will all be important elements of the supplement as, at the end of the day, the Observer is the people’s paper, written with you, the reader, in mind.

Or perhaps you have another story in mind which you would like featured. Please let us know.

You can send any pics and memories to editor@leitrimobserver.ie or via post to Claire McGovern, Editor, Leitrim Observer, 3 Hartley Business Park, Carrick-on-Shannon or call direct on 071 96 22606.

All photos will be returned to their owners.

We look forward to hearing from you.