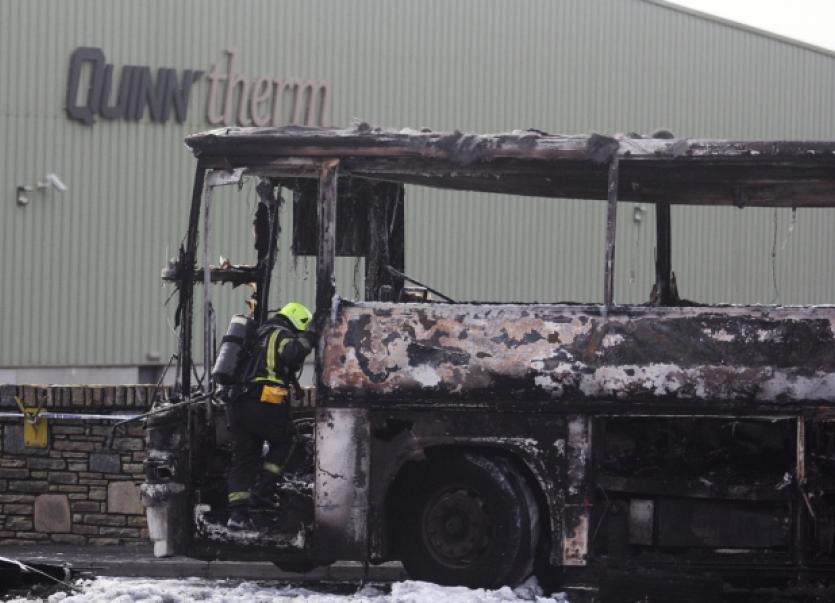 Following the latest attack on property previously owned by Sean Quinn, the burning of a bus in Ballyconnell, Mr Quinn has hit out at the prepretrators.

Following the latest attack on property previously owned by Sean Quinn, the burning of a bus in Ballyconnell, Mr Quinn has hit out at the prepretrators.

Following the arson attack on the bus which was parked in front of the Quinn Therm plant, Sean Quinn responded to a statement released by the Aventas Group calling on him to condemn the attack.

“While the statement does not specifically name me, I believe it is none the less important to reiterate that I have already condemned these attacks in the strongest terms, a fact that is widely reported in the national media,” said Mr Quinn in his statement.

“Lest there be any doubt, I wish to reiterate in the most categoric terms that I condemn these unlawful acts and that any persons carrying out such acts are not acting in my name.”

Mr Quinn added that he has, in the past, offered assistance to the Quinn Group saying, “Furthermore, it is important to note that I met with the Chairman of the Quinn Group Mike McTighe in May 2012 and offered any assistance that I or my family could provide. In February 2013, I again wrote to Mr McTighe and the Group’s financiers offering any assistance required. None of these offers were accepted which is disappointing and make (the Aventas Group statement) surprising.”

Mr Quinn also addressed what he describes as inaccuracies in the Aventas Group statement saying, “It is indisputable that Anglo Irish Bank orchestrated a covert and underhand takeover of the Quinn Group. This action is still the subject of lengthy litigation being taken by my family against Anglo before the Commercial Court. It is further indisputable that Anglo is still a part owner of the Quinn Group.”

Following the burning of the bus a statement was also released by the Concerned Irish Citizens (CIC) Group in which they, “condemned all acts of vandalism against the Quinn Group including inept management since the ousting of Sean Quinn and his experienced team which has put the future of all workers at risk. CIC also call on the CEO of the company to address the fact that he has been paid €1,089,000 from the company while failing to address the concerns about their jobs.”