Re-elected councillors are ready to meet any
new challenges 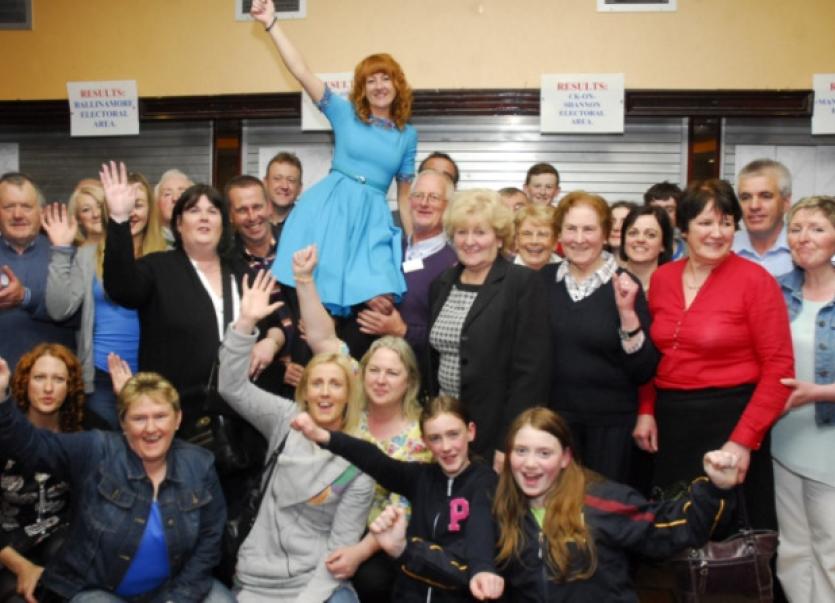 Established councillors, Enda Stenson, Sinead Guckian and Sean McGowan, were all returned and expressed both their delight and their determination to meet the challenges that face the new council.

Cllr Enda Stenson topped the poll with 858 votes which elected him on the first count. This was his third time to top the poll in four elections.

He was obviously delighted but also paid tribute to those who did not make it.

“On a day like today happiness is always tinged with an amount of sadness because while I was lucky enough to get elected on the first count, there’s people I have worked with for the last five years, Francie Gilmartin, John Ward, Thomas Mulligan, the finest of councillors, and it’s extremely hard to show happiness when there’s people who you have regard for in a sad place,” he said.

Enda said he felt he ran a pretty good campaign and thanked his family members for their help.

“At times it was difficult because when you’re within the council, even though I’m an independent you would be seen, particularly because you were chairperson, as part of the establishment.”

He said this campaign was the toughest campaign that I’ve ever been involved in.

The new area meant a new challenges and he is thankful to those who peolpe who voted for him. “I got 109 votes in the Leitrim area and I have got to live up to that. As I told everyone at the doors I can only promise them my biggest effort, to do my best,” he said.

He put in a huge effort in Carrick but believes that the council has got to do something for the more outlying areas, particularly the likes of Mohill.

“The town of Mohill is dying on its feet, there’s nothing moving. Something, let it be the proper procedures, needs to be put in place. The County Enterprise Board is now under the wing of the council, maybe we could do something for a town like Mohill.

Of the new councillors elected, he said, “Anyone who was elected by the people is entitled to represent those people and I am sure that they will do their very best for Leitrim as I think that everybody who is elected at any time does for their county.”

Cllr Sinead Guckian expressed her delight at retaining her set in the new Carrick-on-Shannon area.

Elected on the fourth count, Sinead paid tribute to her supporters and, in particular, her canvassing team.

“I am coming from a small catchment area and so it is a great achievement and a tribute to everyone involved in my campaign that I have been returned for a fourth term.

“It is a real honour to be able to serve the people of my area. It has been so for the past 15 years and I am committed to continuing my hard work over the next five years as well,” she said.

She acknowledged that the new Council format would be challenging but stressed that she would continue to push the rural agenda during her new term.

Cllr Sean McGowan, who was elected on the fifth count, said it has been a long seven and a half weeks campaigning.

“I’m delighted to get over the line. It was the most difficult campaign but having said that, people were very nice. What I did notice is that they were engaging a lot more this time.

“I enjoyed the canvass and I want to thank all my family for the support they have given me, camapign team and canvassers,” he said.

He too acknowledged those councillors who had lost their seats.

“We (Fianna Fáil) ran 10 candidates, we knew we weren’t going to get all ten elected but you have to say Sinn Féin polled extremely well as did the independents and it’s a great credit to them and I wish all the candidates who have been successful all the very best.