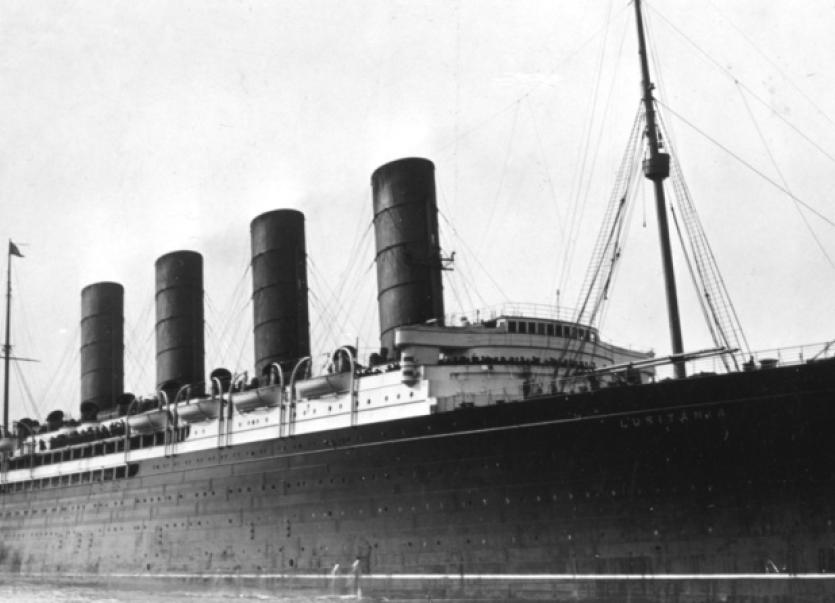 The story of the sinking of the Lusitania is one that is recalled repeatedly in this part of the world around this time of the year particularly given that the disaster recently passed its centenary year.

The story of the sinking of the Lusitania is one that is recalled repeatedly in this part of the world around this time of the year particularly given that the disaster recently passed its centenary year.

The event is remembered by the Irish as much as it is anywhere else not only because of the large number of people from these shores who were lost that night, but also because of the proximity of the event. The Lusitania and 1,191 of its 1,962 passengers dropped to their watery graves approximately eleven miles off the south coast of Ireland, near Kinsale, Co Cork on May 7 1915 after she was struck by a torpedo from a nearby German U-Boat which was patrolling nearby. But for the people of County Leitrim, the disaster had a much more local feel than many realise.

Three people from north of the county are known to have passed away that night with the communities of Killargue and Manorhamilton all reeling from the catastrophe.

The plight of Mary Rooney (Manorhamilton) is reasonably well known in her local areas. Although the deaths of sisters Margaret and Catherine (better known as Kate) Waters (Killargue) have gone under the radar somewhat.

Sean (John Paul) Johnston, both a native and resident Dromahair whose late wife Mary Elizabeth (nee Gilhooley) was a niece of both Margaret and Kate has furnished the Leitrim Observer with details of the sisters’ journey to America and their attempted return. Both Margaret (25) and Kate (29) boarded the Lusitania at New York having made their way from California where they both were working as trainee nurses for a short while. Intent on visiting their elderly mother who was on her death bed, the pair never made it home and upon hearing the news from a stranger, their mother passed away shortly after.

Sean explains: “A man, who was unknown to the family had escaped the wreck on a lifeboat and was telling a neighbour of Mrs Waters’ that he had seen Margaret and Kate on the rail of the boat before it sank. Mrs Waters heard this through an open window in her bedroom and died soon after, God rest her soul.”

Sean is of the opinion that the story of the Waters sisters has gone largely unnoticed potentially because their papers had been involved in some sort of mix-up during their time in California. “They had taken out American papers so were classed as so”, Sean says. “That’s maybe why the people around here didn’t know of both ladies. The news of the sinking was a little slow in getting to this part of the country.”

Also hoping to land in Liverpool that day was Mary Rooney. According to historian Dominic Rooney, also from the north Leitrim town, Mary had travelled across the Atlantic in 1902 and worked as a domestic servant to a Mrs JS Hollinshead of Henry Street, Brooklyn. She was also making her way back to Leitrim to see her mother who was gravely ill. Dominic says Mary signed for no apparent reason, her last will and testament on the last day of April, a day before the Lusitania was to leave for what proved to be her final adventure.

“Nobody knows why she did it” says Dominic. “She left an estate of $5,000 plus property in the Brooklyn area and the main beneficiaries were her mother Rose and brother James.” The latter ran a tailoring business on Teapot Lane in Manorhamilton. Dominic told the Observer that although Mary’s remains are forever lost to the Celtic Sea, her name is included on the tombstones of both her brother Patrick (died 1908) and her sister Delia (died 1913) in Holy Cross Cemetery, Brooklyn.

It is also thought that there may have been a fourth Leitrim native killed on the Lusitania but details are sketchy. There have been reports of a ‘Peter’ McPartlin from Rossinver who drowned during the incident but records show that the only person with an identical surname is a man called Myles McPartlin from New York. Of course there is every possibility that this could be the same man given the changing of details on papers which was a common occurence in those days.

The Leitrim Observer is keen to hear from anyone who may have any further information or paraphernalia relating to Leitrim’s link to the Lusitania disaster. You can email editor@leitrimobserver.ie.