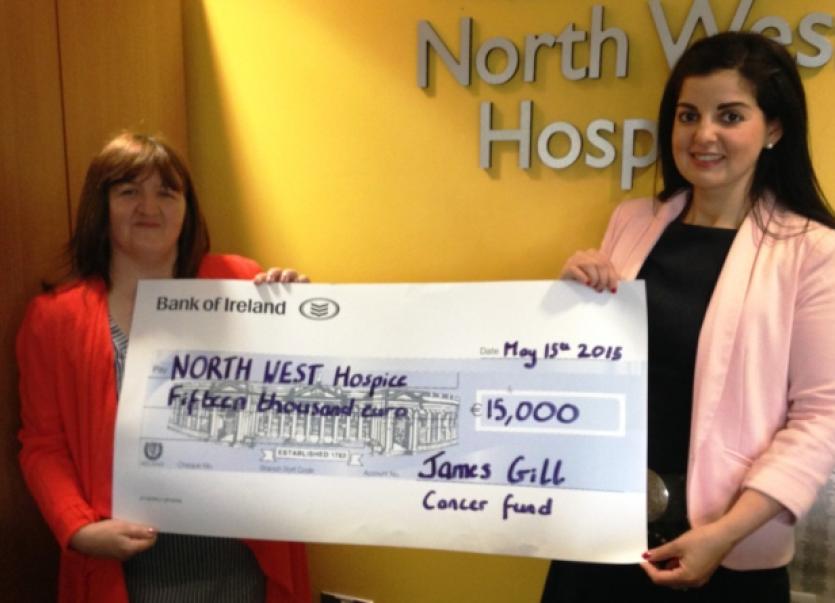 North West Hospice has received a very generous donation of €15,000 from the James Gill Cancer Fund which has enabled the purchase of four state-of-the art sofa-beds as well as a brand new bladder scanner.

North West Hospice has received a very generous donation of €15,000 from the James Gill Cancer Fund which has enabled the purchase of four state-of-the art sofa-beds as well as a brand new bladder scanner.

The cheque was presented to North West Hospice by Geraldine Gill, mother of the late James Gill, three days before the second anniversary of James’ death on May 18.

James suffered from a rare form of liver cancer — Fibromellar Hepatocellular Carcinoma, also known as FLL-HCC — which affects only 200 new patients across the world every year.

During his illness James’ family and friends set out to raise €80,000 to assist in his treatment in the US as the HSE had turned him down for funding. Sadly when James’ treatment became available in America and more than €60,000 had been raised to cover it, he became extremely week and passed away in May 2013.

Speaking about the donation, Dr Cathryn Bogan, Consultant in Palliative Medicine at North West Hospice said, “We are sincerely grateful to the Gill family for this very kind donation. The funds have allowed us purchase a bladder scanner for our In-Patient and Community Team to use. This will aid our clinical examination and help enhance patient comfort. The purchase of four new sofa-beds also made possible by this donation will provide patient families with additional comfort and somewhere to rest overnight. James’ legacy will bring comfort to North West Hospice patients for many years to come.”

Diagnosed only a month before his 18th birthday, James spent his 18th, 19th and sadly his 20th birthdays in hospital. James was widely known for his positive outlook and strength throughout his illness. He defied doctors expectations when he sat his Leaving Certificate in the middle of his illness and refused to dwell on the illness or discuss it with his motto to everyone being to just “smile and wave”.

James had wanted to use any funds remaining from his treatment to create a ‘chill-out room’ in St Vincent’s Hospital with games and books in it for teenagers and older children as he felt there was nothing for that age group in the hospitals he attended.

James’ parents Geraldine and Declan have ensured that his legacy has been felt far and wide and will continue to do so for many years to come.