Time for a mature debate about our county town 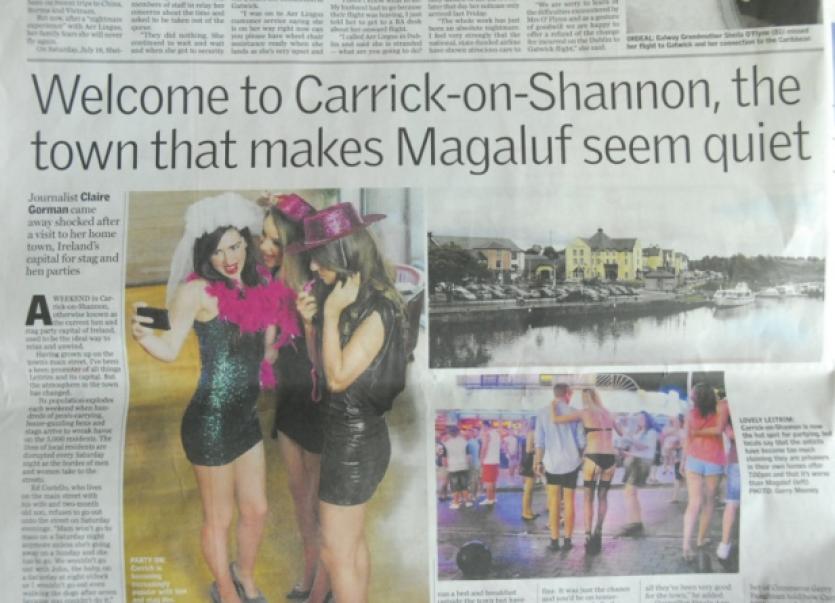 In the same week that Carrick-on-Shannon was shortlisted as one of the top 15 tourist towns in the country, an article published in the Sunday Independent has caused quite a furore and pushed Carrick into the national spotlight.

In the same week that Carrick-on-Shannon was shortlisted as one of the top 15 tourist towns in the country, an article published in the Sunday Independent has caused quite a furore and pushed Carrick into the national spotlight.

The article by local woman Claire Gorman detailed her personal shock at the behaviour of the hens and stags in the town each weekend.

Carrick-on-Shannon is one of the more prominent destinations for hens and stags in Ireland and the town caters for large numbers of them each weekend.

The article, in fairness to the writer, was an opinion piece with contributions from a local resident, a Garda Inspector, a local councillor, a taxi driver and former B&B owner, and the President of the Chamber of Commerce who happens to be a tourism accommodation provider.

Each person gave their own view of the town and their experiences of stag and hen parties - both good and bad.

In that sense, there was balance to the story. What was perhaps disingenuous was the headline and the comment that mayhem on the streets of Carrick “make Magaluf seem peaceful and civilised.”

And it is that likening of Carrick to Magaulf that has ruffled more than a few feathers in the county town.

Social media has been ablaze since Sunday and the writer of the article (and her family) have come in for some heavy and indeed over-the-top criticism. Debate the issue, don’t bully someone over it.

That the article has got everyone talking is a good thing. Perhaps it is now time for a mature, healthy debate about our county town, how we view it, what direction we would like to see it go and what we can do to improve it. Because, this town belongs to all of us, we all have a stake in it, we all want to see it succeed.

Of course, the huge numbers that swell the town’s population each weekend are important to the economy of the town.

So many businesses rely on their custom and many people depend on that business to hold down part time and full time jobs. You can fully understand people being angry at an article portraying the town in a mostly poor light.

There are so many positive things about Carrick-on-Shannon and its people that don’t need to be listed, suffice to say there is great community work carried out here by tireless community groups.

The failure of the article to greater highlight the positivity in Carrick towards hens and stags and the benefits they bring to the town was evident in the reaction to it.

So, is everything as bad in Carrick as the article suggests? No, it is not. Thousands of people come here and enjoy themselves, spending their money, having a great time and leaving with an impression of a beautiful little town that is great craic and a great place to visit.

On the flip side, the question must be asked, is everything in Carrick as okay as some would have you believe? The answer is also no.

Unfortunately, there are some who come here and cause trouble, and damage, but they are in the minority. Everyone agrees the increased police presence on the streets at weekends has improved the situation somewhat.

A greater crackdown on public drunkeness, noise, disorderly and lewd behaviour and urinating in public would allay a lot of the concerns being expressed by local residents.

Those who don’t behave themselves should be hit hard in the pocket and be told in no uncertain terms by the police, the accommodation providers and the publicans they are not welcome back to this town.

Carrick is a great town, with so much going for it that other towns don’t have. We just need to mind it, to ensure high standards are maintained and everyone’s opinion respected.