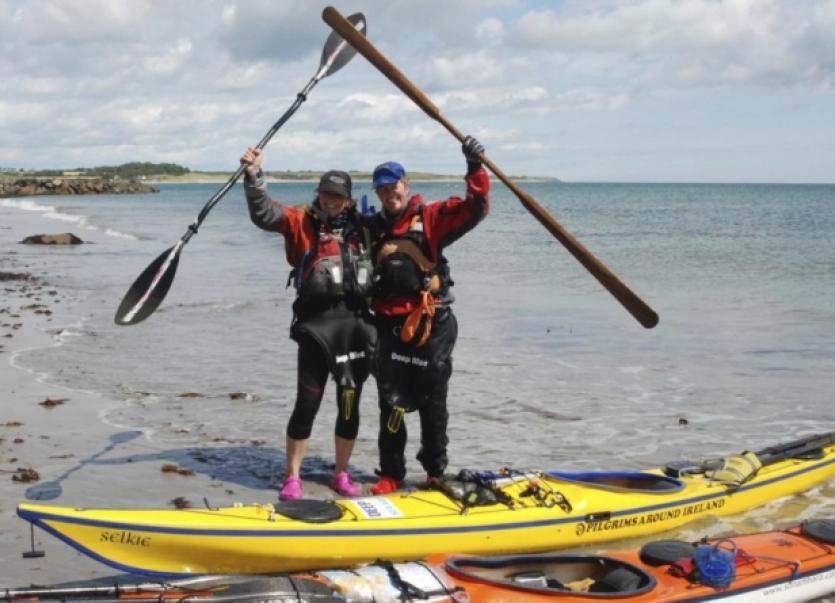 Two Irish female seakayakers have entered local history books by being the first to paddle around the island of Ireland by starting and finishing on the Wexford shoreline.

Two Irish female seakayakers have entered local history books by being the first to paddle around the island of Ireland by starting and finishing on the Wexford shoreline.

Sonja Ewen who lives near Lough Melvin and Wexford resident Susan Honan departed from Carne Beach on June 7, and completed the circumnavigation at the same place on Wednesday, July 22.

They arrived in typical sunny south-east sunshine to be greeted by a cheering party of family, friends and well-wishers.

According to Sue Honan, who lives in Drinagh, “We decided to start at Carne because, with Carnsore Point not too far away, we had a window of good weather with which to paddle along the south coast and reach Mizen Head before it changed for the worse.”

Sonja Ewen reckons the total distance paddled was about 1,500km, with the hardest weather sections around Arklow and Kinsale.

It’s estimated that perhaps only six females had previously circumnavigated the island.

Honan and Ewen each have over six years seakayaking experience, but had never before attempted any trip longer than about 300km.

Ewen also has considerable experience as a kayak instructor.

The duo brought sufficient camping gear to enable them to camp out most nights, although they occasionally enjoyed the hospitality of friends.

Not unnaturally, they each had their down days when they might not have felt up to the task, but never both on the same day.

Regarding their equipment, Honan explained, “We used Nigel Denis Pilgrim Expedition fibreglass sea kayaks. They have space for an ample supply of food and our camping gear.

“In our on-board larders we had a variety of pasta, nuts, cheese and fruit, as well as Stable Diet Miracle Munch bars made in Wexford.

“Of course we both missed our home comforts and our families, but with no distractions of the modern world we were able to concentrate on paddling.

“Sonja and I got on really well too, with not a cross word throughout the seven-week trip.”

Ewen emphasises that this was no foolhardy trip. “We’re both highly experienced seakayakers and took the precaution of radioing the coastal authorities in advance of our passage past busy ports.

“In heavy seas we stuck close together, but in calmer waters we were able to enjoy the freedom of the open sea and the exhilarating skyscapes and landscapes around us. It was a wonderful experience, one I’ll treasure forever”.

Honan and Ewen have been using their circumnavigation to raise awareness of Headstrong, the national organisation working to change how Ireland thinks about young people’s mental health.

So they’re asking people to make donations by texting GETACTIVE to 50300 or online through www. headstrong.ie