The Guns of Mullaghmore 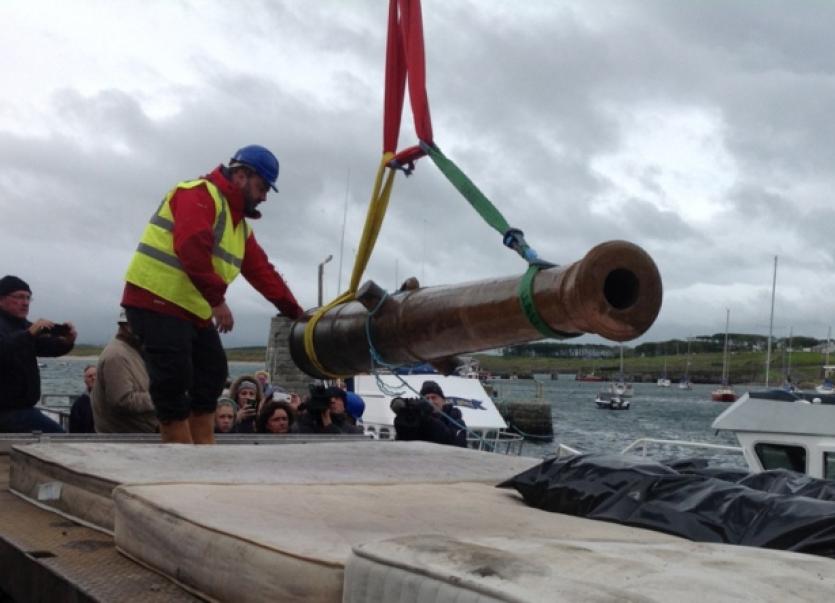 When the Spanish Armada ships sank in September 1588 at Streedagh Co. Sligo a surviving captain of one of the sunken ships the San Pedro, Francisco de Cuéllar and some other survivors, who made their away ashore, had a big impact on North Leitrim history of the time.

When the Spanish Armada ships sank in September 1588 at Streedagh Co. Sligo a surviving captain of one of the sunken ships the San Pedro, Francisco de Cuéllar and some other survivors, who made their away ashore, had a big impact on North Leitrim history of the time.

Francisco and his followers were given succour first at Brian O’Rourke’s Castle in Glencar and later at MacClancy’s Castle in Lough Melvin.

Brian O’Rourke, the king of West Bréifne, was beheaded in the Tower of London in 1591 for giving de Cuéllar and his survivors succour while de Cuéllar eventually got back to Spain.

Some of the artefacts of the sunken Spanish Armada ships are being currently brought ashore at Mullaghmore, which is close to Tullaghan, Co. Leitrim.

“The harbour walls of Mullaghmore, Co. Sligo were a memorable place to be on the morning of 20th July 2015. History of a distant past came to life and amazed those who came to see.

“It was the occasion when the personnel from the underwater unit of the Department of Arts and Heritage took ashore three of the guns, which were mounted on the decks of the warship ‘La Juliana’ which was wrecked in a massive storm off the coast of Streedagh, near Mullaghmore on the 25th September 1588.

“Here they were again seeing the light of day, feeling the fresh air for the first time in 427 years and presenting themselves in virtual perfect condition to the excited crowd waiting on the pier.

“The ‘La Juliana’ was one of three ships of the Spanish Armada which went down in that storm off Streedagh. These formed part of the remaining ships attempting to make their escape down the west coast of Ireland following what turned out to be a disastrous attempt to invade England, orchestrated by Prince Philip II of Spain.

“With her were lost the compliment of 395 men, together with all the poor souls on her two sister ships, the ‘La Lavia’ and the ‘Santa Maria La Vision’. In total 1,100 men were lost on the Sligo coast that day.

“What we have seen so far is magnificent. They have emerged from the sea in almost mint condition. Huge pieces of wrought bronze cannon, some showing ‘manufactured in Palermo in Italy in 1570’ inscribed on them.

“Exquisite insignia of the period is woven into the curvature of the gun barrels. The magnificent artistry and culture of the middle ages beam out from the forms depicted.

“On one cannon St. Peter holding the keys of the kingdom of Heaven presents himself with neatly trimmed beard and eyes looking Heavenwards. He is escorted by magnificently crafted dolphins looped in their familiar pattern standing proud of the barrel itself.

“As this piece emerged from the water the divers related that two real dolphins rose with it to the surface and escorted them to shore bidding farewell to their brothers.

On another gun Saint Rocho, a sea faring saint of those days is presented magnificently decked out inordinate travelling gear with wide brimmed hat slung on his shoulder and staff in hand.

“He is accompanied by his little dog tripping along by his side. Virtually every gun has its patron and message; incredible to see that such instruments of destruction were enhanced with the artistic endeavour of the times and stamped with specific religious significance.

“The sea has been very generous to give these amazing pieces of artwork back to us. They throw new light on the grandeur, affluence, style and sense of invincibility which launched the Armada with great pomp and ceremony from La Coruna in August of 1588 with 130 ships and 29,450 men. The end result was a spectacular disaster,” Oliver says in conclusion.