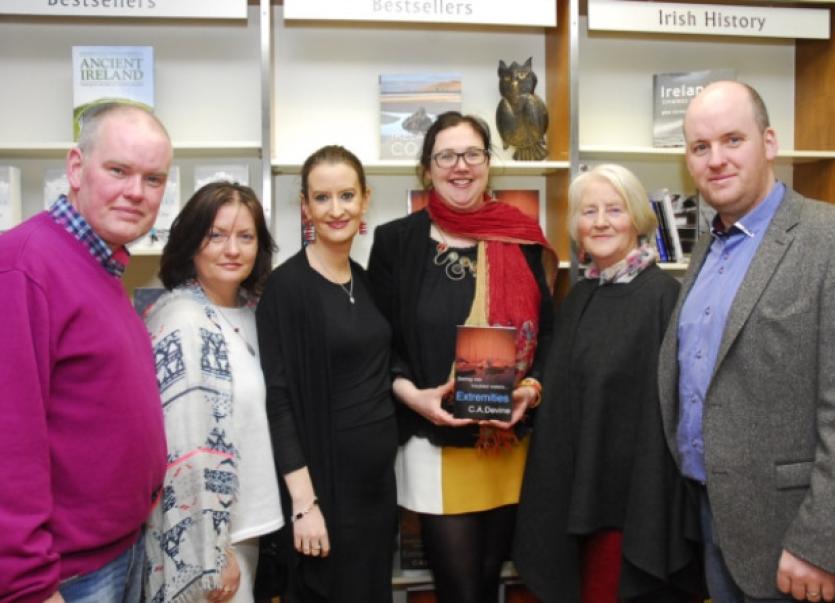 The novel was launched by Caroline Wynne, Director of the arts events company, Artscope, Manager of the acclaimed Mountains to the Sea Book Festival in Dun Laoghaire and a Croghan local.

Extremities combines the much loved crime and thriller genres to take you on an edge of the seat ride across the Mediterranean and out into the Atlantic.

Catherine told the Leitrim Observer that sales of her first book are going “great” with her first published novel. She is also delighted with the feedback and reviews from readers online.

Catherine moved to Croghan from Scotland in 1998 with her husband who is from Eastersnow, Croghan.

Over five years ago, Catherine took time off work to write a novel. She had written a book years before but had never tried to publish it.

She left work with an idea for a book, but what manifested in the first draft seven months later was a very different story.

During her time off learning how to sail around the Mediterranean, Catherine came up with the idea for this spy thriller which follows disgraced NYPD Lieutenant and includes a kidnapping, deception, war crimes, drugs, conspiracy and a crusade of revenge.

Catherine said living on a boat, cut off from the world, this story “established itself” and the characters developed.

Catherine had been writing on and off for ten years before she sat down to write ‘Extremities.’

As she works to publicise this novel at home and in the UK, the new author has already started on her second novel which is set around Leitrim/Roscommon/Sligo and has more of a “hacker element” which is closer to the former computer programmer’s expertise.

Although the first draft of the book took only seven months, it was almost three and a half years before the book was published.

Catherine did admit it is more difficult to find the time to write with a toddler wandering about, but she is determined to continue in this creative crime writing career.

You can purchase Catherine’s book in The Reading Room, Carrick-on-Shannon in First Chapter, Boyle or online.