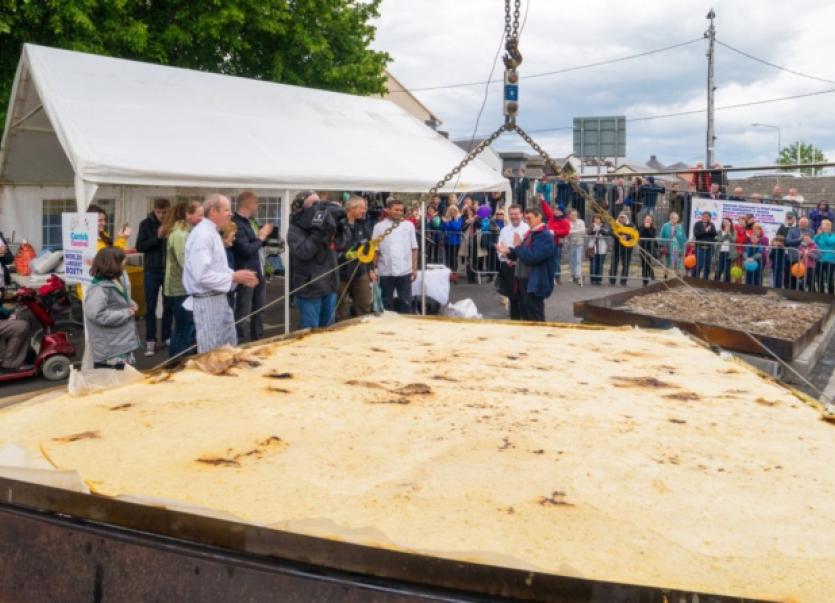 After the success of last year’s ‘rock the boat’ and ‘brush dancing’ world record attempts, Carrick-on-Shannon was once again celebrating last Friday.

After the success of last year’s ‘rock the boat’ and ‘brush dancing’ world record attempts, Carrick-on-Shannon was once again celebrating last Friday.

This time the record attempt involved making the world’s largest or rather heaviest, boxty. The previous record for the world’s heaviest potato based pancake, of which boxty is a local speciality, stood at 200kg.

As part of the Carrick Carnival celebrations chefs Shamzuri Hanifa from The Cottage Restaurant, Padraic Gallagher from Gallagher’s Boxty House and Paddy Fitzgerald joined forces to recreate the local speciality on a much larger scale.

A small army of volunteers were in place to assist peeling the potatoes that would be used as the primary ingredient. When you consider 140kg of potatoes were required, you get an idea of just how much peeling was required!

The specially designed grill, which was constructed by Archway Products, Jamestown was an impressive sight to behold with burning coals placed underneath the grill to ensure sufficient heat was generated.

The potatoes, half grated and half mashed, were mixed with 100kg of flour, 80 litres of milk, 80 litres of water and 1kg of salt.

When attempting to cook boxty on a more conventional scale it proves to be a meal of convenience but on the scale that Sham, Padraic and Paddy were attempting, it becomes more difficult.

Regulating the heat proved to be one such challenge but the team proved to be more than up to the task and after 90 minutes of cooking time the world’s largest boxty was declared cooked.

Still attached to the grill, the boxty weighed in at a staggering 518 kg, with the boxty alone weighing 265kg, beating the previous record by more than 65kg.